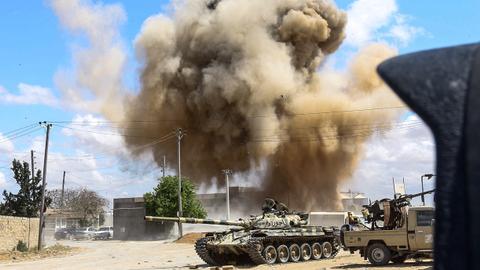 TRIPOLI: Fighting near Tripoli has killed 121 people and wounded 561 since strongman Khalifa Haftar launched an offensive earlier this month to take the Libyan capital, the World Health Organisation said Sunday.
WHO’s Libya account said on Twitter the organisation was sending medical supplies and more staff to Tripoli, and denounced “repeated attacks on health care workers, vehicles” during the fighting which erupted on April 4.
Haftar’s forces, which control swathes of the country’s east, have defied international calls to halt their battle against fighters loyal to the UN-backed Government of National Accord based in Tripoli.
The United Nations’ office for humanitarian affairs said more than 13,500 people had been displaced by the clashes, while more than 900 residents are living in shelters.
“Three medical personnel have been killed and five ambulances have been incapacitated by shrapnel,” OCHA said in a Saturday statement.
As well as fighting on the ground, the two sides have launched daily air raids and accuse each other of targeting civilians.
The north African country has been in turmoil since the NATO-backed overthrow of dictator Moamer Kadhafi in 2011, which has led to the creation of a bewildering array of militias all seeking to take control.
Haftar backs a rival administration based in eastern Libya that refuses to recognise the UN-backed unity government led by Fayez al-Sarraj.