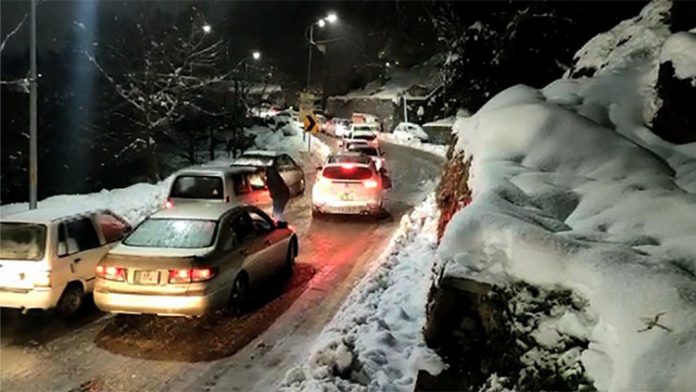 The federal government has deployed the personnel of the Pakistan Army and other civil-armed forces after 16-19 people died in their vehicles in Murree due to heavy snowfall in the hill station.

All the routes in Murree were blocked after thousands of vehicles entered the city, leaving the tourists helpless on the roads. In a video message, Interior Minister Sheikh Rasheed Saturday said Murree had “seen a huge number of tourists after 15-20 years”, and due to that, a crisis took place.

Shaikh Rasheed said the government was forced to close the road from Islamabad to Murree. “Islamabad and Rawalpindi’s commissioners, deputy commissioners, police, are carrying out rescue works.”

The interior minister said five platoons of the Pakistan Army have been called in for rescue efforts, while Rangers and Frontier Corps will be deployed on an emergency basis.

“As many as 1,000 vehicles have been stuck since night […] some have been evacuated; 16-19 deaths took place in cars. The locals provided food and blankets to the stranded people.”

The interior minister said the authorities would evacuate 1,000 vehicles by today evening, while the roads would remain closed to Murree till tomorrow 9pm.

“We have also decided to ban tourists who are planning on coming to Murree by walk; this is not the time to come to Murree,” Rasheed said.

According to the local administration, rain and blizzards are forecast tonight in and around Murree, with thunderstorms at a speed of 50-90 kmph and heavy snowfall.

The administration has warned the citizens not to leave their homes in severe weather or turn to Murree as severe weather conditions are likely to continue till late at night.