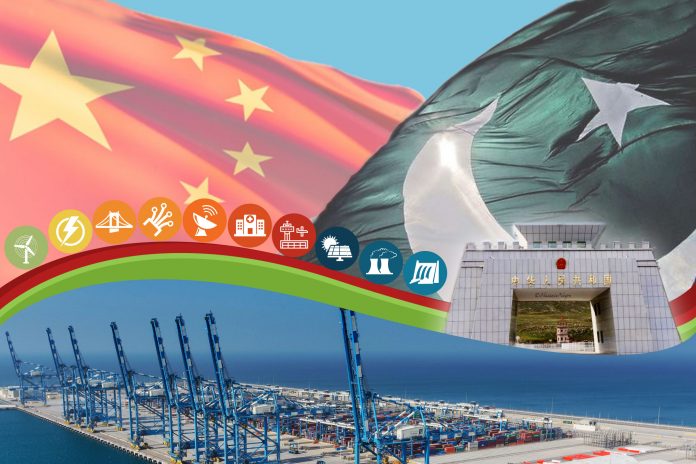 ISLAMABAD:Pakistan and China here Monday agreed for initiating the first phase of development of Special Economic Zones (SEZs) under Chian-Pakistan Economic Corridor (CPEC) project, besides enhancing cooperation in other sectors of the economy including petrochemical, steel, textile, leather processing and machinery. It was also decided that the Chinese side will motivate their enterprises for setting up of their industries in SEZ.
Consensus to this effect was developed in Senior Officer Meeting (SOM) on Industrial cooperation on the sidelines of 7th meeting of Joint Cooperation Committee (JCC) on China Pakistan economic Corridor, which was held here on Monday.
Secretary Board of Investment Azher Ali Choudhry lead the Pakistani side, whereas Chinese side was led by, Director China International Engineering Consulting Corporation, Dou Hao.
The meeting was attended by Senior Officers and representatives of Ministries of Planning Development and Reforms, Finance, Industries and Production, Energy, besides representatives from provincial governments, FATA, Azad Jammu Kashmir, Gilgit Baltistan attended the meeting, said a statement issued here .
Secretary BoI welcomed the Chinese delegation and highlighted that after the initial work the stage was now set for industrial cooperation to attain new heights. He emphasized for frequent interaction of the delegation of both sides.
He also highlighted the importance of skill development for successful implementation of industrial projects and called for Chinese assistance for establishment of centers for vocational training at Islamabad and other cities on CPEC route.
Executive Director, NAVTTC also proposed up gradation of National Training Bureau (NTB) into a state of the art institute of technical and vocational training.
The head of the Chinese delegation informed that a lot of work had already been done to materialize industrial cooperation as the energy and infrastructure projects have been completed to support industrial development.
In the initial phase, the Chinese side has shared its experiences regarding planning and developments of SEZs and this phase will focus on the development of SEZs and to enhance understanding in other areas of Industrial Cooperation. …APP