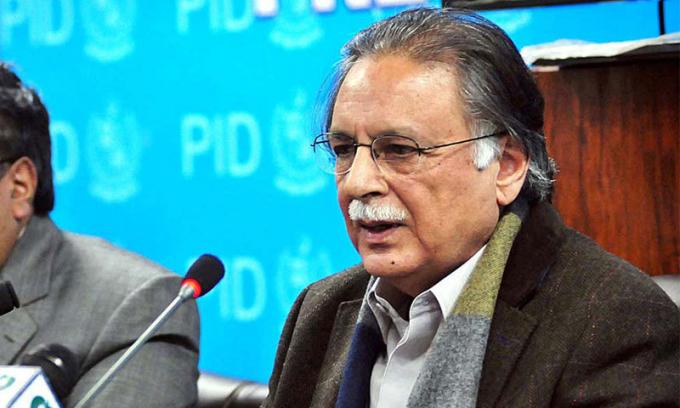 LAHORE: Federal Minister for Information, and Broadcasting and National Heritage Senator Pervaiz Rashid on Saturday said all outstanding issues including Kashmir would be taken up at the upcoming meetings of the security advisors from Pakistan and India.
Talking to media men here, he said Siachin, Sir Creek, Kashmir, terrorism and water are outstanding issues between the two countries.
The Federal Minister dispelled the impression that Kashmir issue was neglected during the meeting between Prime Minister Muhammad Nawaz Sharif and his Indian counterpart Narendra Modi in Russia, adding that Pakistan had fought three wars with India on Kashmir issue only in the past.
Pervaiz Rashid said it is Prime Minister Muhammad Nawaz Sharif who raised Kashmir issue at all international forums including General Assembly, adding that "PML-N government has always raised Kashmir issue at the Security Council, international platforms and the United Nations (UN)."
"The agreement to take up all outstanding issues at the security advisors’ meeting is an acceptance of Pakistan’s stance on Kashmir issue and victory of the government", he responded.
However the Minister said only a peaceful, secure and prosperous Pakistan could support the cause of Kashmir in a befitting manner while a terrorism-hit country could not help Kashmir cause.
To another query, Senator Rashid said former dictator Pervaiz Musharraf was responsible to weaken Kashmir issue on international level, adding that Gen (Retd) Pervaiz Musharraf’s dictatorial regime linked Kashmir with terrorism.
He said former Indian Premier Atal Bihari Vajpayee had declared the year 1999 as the year of the resolution of Kashmir issue in the light of Lahore Declaration, which was our foreign policy success.
But, unfortunately that process was derailed by a Musharraf coup, he added.
Meanwhile talking to different news channels, the Minister reiterated that when National Security Advisor Sartaj Aziz would sit with his Indian counterpart on the negotiating table "Definitely all outstanding issues including Kashmir, Siachin and Sir Creek, water, violation on the working boundary and Pakistan’s other reservations will come under discussion."
Replying to a question about mentioning of Mumbai incident in the joint communique issued after the meeting between Prime Ministers Muhammad Nawaz Sharif and Narendra Modi on sidelines of Shanghai Cooperation Organization (SCO) summit in Ufa, Russia, he said a number of people belonging to different faiths and nationalities were killed in the incident, following which the International community had the desire to punish the elements involved in the incident.
Pakistan, he said, time and again had asked India to share evidence, if it had any, but India refrained. But now, India in the joint communique had agreed to share evidence with Pakistan and "It is our victory."
He said Pakistan had the stance that India was the hurdle in trial of the Mumbai incident accused as it was not providing evidence to Pakistan.
"Both sides agreed to discuss ways and means to expedite the Mumbai case trial, including additional information like providing voice sample," the Minister read out a point from the joint communique."
The Minister said the stood by Pakistan as China had vetoed Indian move in the United Nations with regard to ‘Lakhvi’ an alleged mastermind of the Mumbai incident.
To a question, the Minister said the government was being criticized due to political divide in the country as they were not taking the joint communique in its true spirit.
He stressed the need to resolve all outstanding issues gradually, not in a ‘single jump.’
He said India itself suspended the composite dialogue process with Pakistan due to meeting with representatives of All Parties Hurriyat Conference.
"Now, India has changed its stance, while Pakistan is still stick to its stand, and it is our success," he maintained.
Commenting on the Samjhota Express incident, the Minister said the case was pending with Indian court and hoped that elements involved in the heinous crime would be brought to justice.
In his earlier media talk when asked about PPP Co-Chairman Asif Ali Zardari’s return for Dubai, the minister said Asif Ali Zardari is a Pakistani and he has every right to work for his political party after his own accord.
On the Rangers in Sindh, Pervaiz Rashid said the Sindh government has extended the fullest cooperation in the Karachi operation while the provincial and federal governments were in complete harmony.
He said the Rangers got the mandate as per its will, adding that Karachi operation has the backing and support of all the political parties.
The Minister said the national security agencies and the Rangers have turned Karachi into a very peaceful and safe city.
The Federal Minister lauded the sacrifices of the Pak Army, security agencies, police and Rangers who have sacrificed their lives to make Pakistan terror-free for our children.
About NAB’s accountability, he said the process of accountability should continue while the institutions should be strengthened and weaknesses should be addressed.He said it is responsibility of the accountability bureau to conclude the cases at the earliest.
The Minister said cases had been kept pending for years on a mere allegation and neither investigation was completed nor cases were presented in the court. He opposed the idea that the cases should remain pending for decades on a mere allegation adding that country’s parliament would do legislation on it.