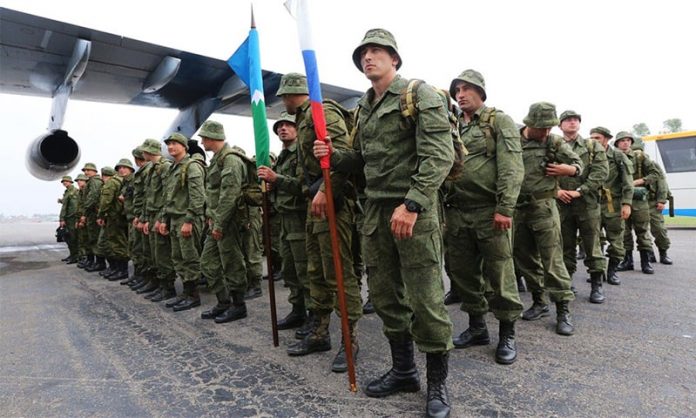 LONDON: Pakistan’s military is intensifying security cooperation with Russia in a remarkable and historic turnaround for two countries that for many decades considered each other rivals, leading British think-tank Royal United Services Institute (RUSI) has said in an analytical report.
The report said that since independence in 1947, Pakistan has been a frontline state for US dominance of the region and the US used Pakistan’s military and its airspace to monitor Soviet activity but now as Pakistan marks its 70th year, there seems to be a strategic shift towards Russia by Pakistan’s military leadership.
“This is a remarkable turnaround for two militaries that were virtually at war for many decades. It was in the 1980s that Pakistan’s enmity towards Russia peaked, and there were regular border skirmishes with the Pakistan Air Force shooting down a Russian intruder, piloted by a future vice-president of Russia, Alexandr Rutskoi.
“Ironically, the pilot who shot down the Russian fighter became the vice-chief of the Pakistan Air Force, and Air Marshal Athar Bukhari, now the incumbent Pakistani Ambassador to Syria, has praised Russian air power in the Middle East,” noted the report.
The main protagonists of this strategic turnaround have been the Pakistan Army and Air Force, starting in 2012 when the then Chief of Army Staff General Ashfaq Parvez Kayani became the first military chief from Pakistan to visit Moscow.
“The Pakistan Air Force which has always been equipped with US fighters is now in consultation with an eye to buying the latest Russian aircraft. It has already signed deals on engineering procurement and Russian engines for its joint fighter produced with China, the JF-17.
“It is no secret that the US has made it harder for Pakistan to buy its F-16s and military aid has been drastically cut in the past two years. Pakistan has therefore had to look to Turkey and Jordan for procuring used F-16s which are not quite the standard required to counter-balance the Indian Air Force.”
The RUSI said that Pakistan’s shift comes in view of the almost monthly amendments and legislation on Capitol Hill in Washington against military sales to Pakistan which has prompted Islamabad to look elsewhere.
“The Russians have stepped into the gap, providing military attack helicopters – a historic first, given Pakistani reliance on American aircraft for six decades. And the embrace is widening. Last year saw the first military drills between the Pakistani and Russian militaries. This was followed last week by the country’s special forces exercising in the Caucasus with Russia. The drills covered mountain warfare, countering urban terrorism and engaging in broader land warfare,” said the report.
It said that Kremlin is uneasy about Indian Prime Minister Narendra Modi’s deep embrace of the US and closer military ties with Washington. And, as the Indians now buy US and French fighters, Russia too is looking elsewhere, including Moscow’s participation in the alliance with China and Pakistan over rising tensions in Afghanistan and Central Asia, it said.
The RUSI report noted that Russia’s strategic turnaround in Afghanistan has also been most remarkable as gone are the old zero-sum game theories applied to the Taliban and the fighters of the Northern Alliance, to be replaced by the courting of both Russia and Pakistan of the Taliban.
The two militaries are cosying up and strategic objectives are aligning in the Middle East and Central Asia, it said.
It said that Pakistan Army Chief of Staff General Qamar Javed Bajwa’s planned visit to Moscow this month as Russia bids to capitalise on a deteriorating relationship with the US.
“US Secretary of Defense James Mattis arrives in Islamabad right on the heels of Bajwa’s Moscow visit and the Americans could have their work cut out. Rapprochement with Russia could be a sign of things to come, if the US keeps threatening the Pakistani military with sanctions and if Washington continues to stall military sales,” said the report.