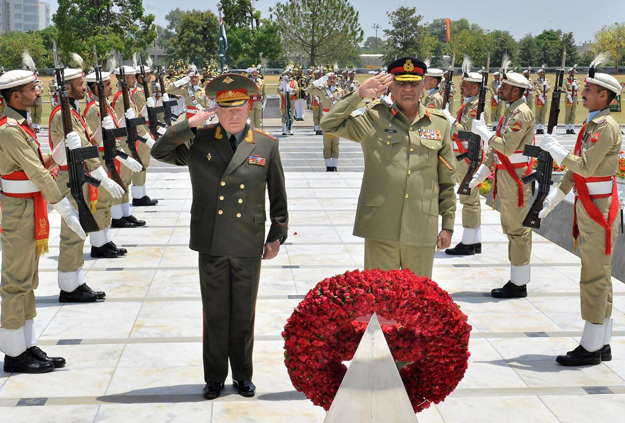 RAWALPINDI: General Oleg Salyukov, the commander in chief of Russian ground forces Tuesday called on Chief of Army Staff (COAS) General Qamar Javed Bajwa at GHQ in Rawalpindi.
According to a statement issued by ISPR, Chief of Army Staff (COAS) General Qamar Javed Bajwa said that military cooperation between Pakistan and Russia will not only help in improving peace and stability in the region, but will also usher economic prosperity.
During the meeting matters related to enhanced security and training cooperation and measures to further expand joint military ties between the two armies were discussed, it added.
General Qamar said Pakistan does not believe in ‘zero sum games’ but rather in integration and cooperation.
The visiting dignitary appreciated Pakistan Army’s professionalism and achievements in war against terrorism. He said that the world should appreciate more what Pakistan has achieved. He also expressed the Russian desire to forge strong and broad based relations with Pakistan.
Earlier, on arrival at GHQ, the Russian army chief laid floral wreath at Yadgar-e-Shuhada. A contingent of Pakistan Army presented the guard of honour to the visiting dignitary.