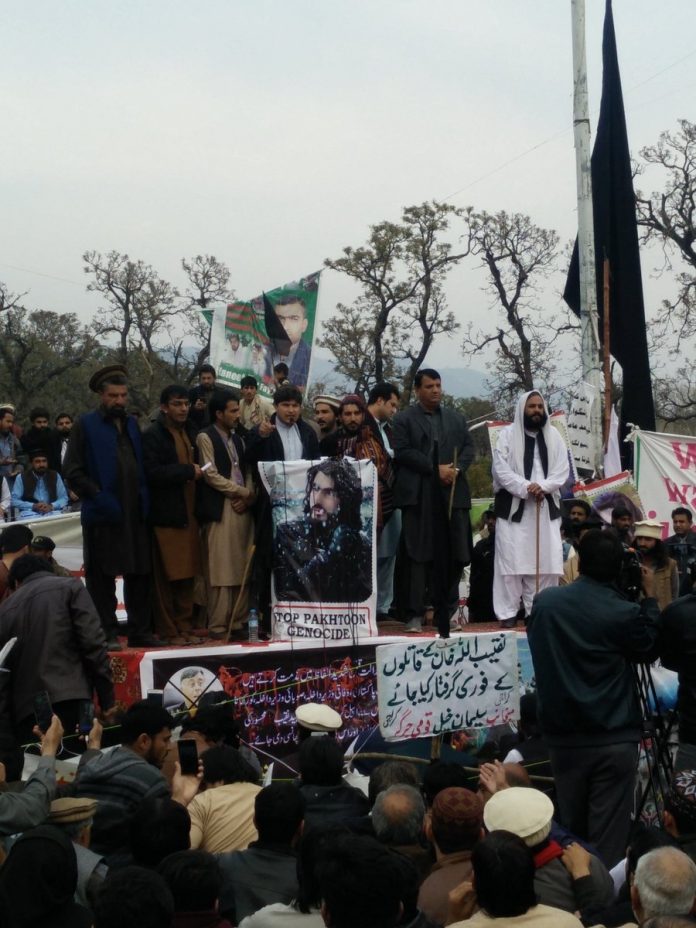 Sets one month deadline for acceptance of demands
ISLAMABAD: Pakhtoon Quami Jirga Saturday announced end to sit-in after successful talks with Prime Minister Shah Khaqan Abbasi and written agreement for acceptance of their demands.
The announcement was made by organizers of the Pashtoon Long March, led by Manzoor Pakhtun and adviser to Prime Minister Amir Muqam.
Manzoor Pakhtoon said that if the government did not fulfill its promises within a month, they would once again march towards Islamabad after one month. He said that the organizers of the long march would continue struggle for the rights of Pakhtoons and they would organize rally Quetta, Wana, Peshawar and other parts of the country. He said that they have given one month deadline for arrest of Rao Anwar, who is accused of extra-judicial killing of Naqeebullah Mehsud.
He said that the prime minister has also promised to recover the missing persons within a month. He said that the prime minister promised to build a college in the name of Naqeebullah Mehsud. He said that the government has given written assurance for acceptance of their demands.
He clarified that the world media had given wrong impression about slogans of freedom, adding that the protesters wanted freedom from Rao Anwar like people.
Earlier addressing the protesters, Amir Muqam said that Naqeebullah Mehsud was martyr of the nation. He claimed that he always raised voice for the rights of Pakhtoon.
Amir Muqam said that all tribal elders including Manzoor were present in the meeting with the prime minister. He said that Pakhtuns always offered sacrifices for Pakistan.
The PML-N leader said that the arrest of Rao Anwar was the top priority of the government, adding that the prime minister has directed the federal and Sindh authorities to take steps for arrest of Rao Anwar.
He said that the prime minister has also ordered the authorities concern to speed up clearing of mines in tribal areas, besides announcing compensation for the victims of the mine blasts in tribal areas.