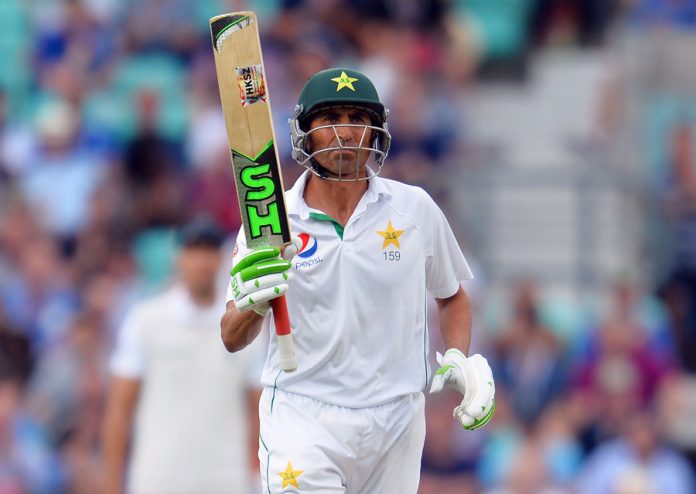 ABU DHABI: Pakistan, who won the toss and decided to bat, ended the opening day of the second Test against the West Indies on 304-4 in Abu Dhabi on Friday.
Younis Khan scored his 33rd Test century before being dismissed for 127. Skipper Misbah-ul-Haq was 90 not out on a batting-friendly pitch at Sheikh Zayed Stadium.
Asad Shafiq made 68 while Sami Aslam was dismissed for six and Azhar Ali without scoring.
Paceman Shannon Gabriel was the pick of bowlers with 2-43.
Pakistan lead the three-match series 1-0 after winning the first Test in Dubai by 56 runs.
Younis Khan had come on to the field today when Pakistan had lost its second wicket for just 42 runs and both the openers, Azhar Ali and Sami Aslam, had lost their wickets for zero and 6 respectively. However, Younis joined Asad Shafiq at the middle and the two batted brilliantly to steer the team out of that brewing crisis.
Younis scored the century in 169 balls in his comeback Test after the illness. He scored his 33rd century with the help of eight boundaries and a six. Younis Khan also improved his own record of not getting lost to the ‘nervous nineties’ for 31st time consecutively.
The former Pakistan captain has so far scored six double centuries and a triple century as well. The biggest record that he has set now is that of scoring 33 centuries in just 109 Tests which is maximum by any batsman in that many tests.
It is pertinent to mention here that Younis Khan is second only to the legendary Sir Donald Bradman when it comes to innings per century ration. Younis took only 194 innings to score 33 hundreds at a ratio of 5.88 innings per century.
The deadly duo has so far scored 3156 runs together in 49 innings together. The count is not over yet as the two are not only fit enough to play for as long as they want to, there is still a second innings left in this Test.
Misbah is still not out at 90 now off 146 balls while Younis Khan got out on the last day of the first day of the 2nd Test between Pakistan and West Indies after having scored 127 runs off 205 balls.
The previous best for two Pakistani batsmen together also featured Younis Khan who had scored a total 3137 runs along with Mohammad Yousuf in 42 innings together.
Younis Khan also scored his 33rd Test century today, becoming only the ninth player of the world to have achieved the milestone. …Agencies