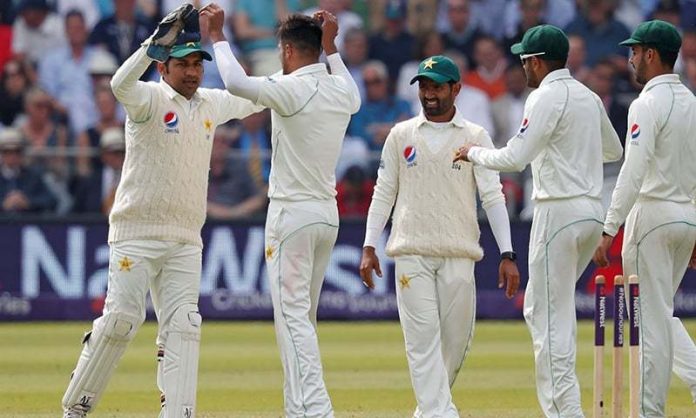 LONDON: Pakistan were dismissed for 363 in reply to England´s first innings 184, a lead of 179 runs, on the third day of the first Test at Lord´s on Saturday.
They resumed on their overnight 350 for eight knowing that the loss of their next wicket would signal the end of their innings after Babar Azam, who top-scored with 68, retired hurt on Friday.
Team management had announced after Friday´s close that Babar had suffered a fractured forearm after being struck just above the wrist by a delivery from England pace-bowling all-rounder Ben Stokes.
The injury is set to sideline Babar for at least six weeks, meaning he had been ruled out of the second and final Test of the England series that starts at Headingley on Friday, June 1.
And when No 11 Mohammad Abbas was caught behind off Mark Wood for five at Lord´s on Saturday, Babar did not come out to bat again.
Mohammad Amir was 24 not out, having hit four fours including a stylish lofted on-drive off Stuart Broad.
Four Pakistan batsmen made fifties, with Azhar Ali, Asad Shafiq and Shadab Khan joining Babar in reaching the landmark.
Pakistan have only ever lost one Test in which they have led on first innings by at least 179 runs, against Australia at Sydney in 2009/10 when they established a 206-run advantage at that stage only to suffer a 36-run defeat.