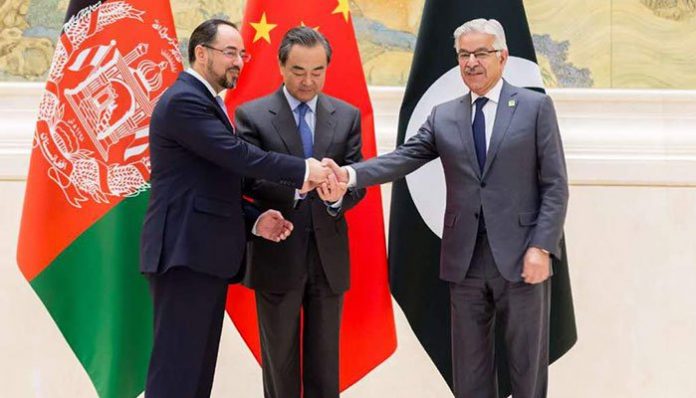 BEIJING: Pakistan, Afghanistan and China have reaffirmed that a broad-based and inclusive peace and reconciliation process is the most viable solution to end the violence in Afghanistan.
At their trilateral Foreign Minister level meeting on counter-terrorism cooperation, security and regional connectivity in Bejing, the Foreign Ministers called on the Afghan Taliban to join the peace process at an early date.
In a joint press release, they said the process should be “Afghan-led, Afghan-own”, and fully supported regionally and internationally.
The three countries reaffirmed their commitment to improving their relations, deepening mutually beneficial cooperation people to people contact advancing connectivity under the Belt and Road Initiative, and fighting terrorism in all its forms and manifestation without any distinction.
Pakistan, Afghanistan and China agreed to conduct win-win trilateral economic cooperation, with an incremental approach, starting from the easier initiative to the more difficult ones.
The three sides reiterated their firm resolve to fight the menace of terrorism.
They expressed their strong determination not to allow any country, organization or individual to use their respective territories for terrorist activities against any other countries.
The three sides agreed to strengthen counter-terrorism coordination and cooperation in an effort to combat all terrorist organizations and individuals without any discrimination.
Meanwhile, at their joint news conference, Pakistan Foreign Minister Khawaja Muhammad Asif said Pakistan has already proposed an action plan for solidarity with Afghanistan and called for early operationalization of five working groups.
He said President Ashraf ghani had support this plan during Baku meeting and added that it can provide basis for a comprehensive cooperation between the two countries.
The Foreign Minister said peace and security in Afghanistan is critical for our people.
Khawaja Asif said implementation of CPEC would strengthen connectivity in the region.