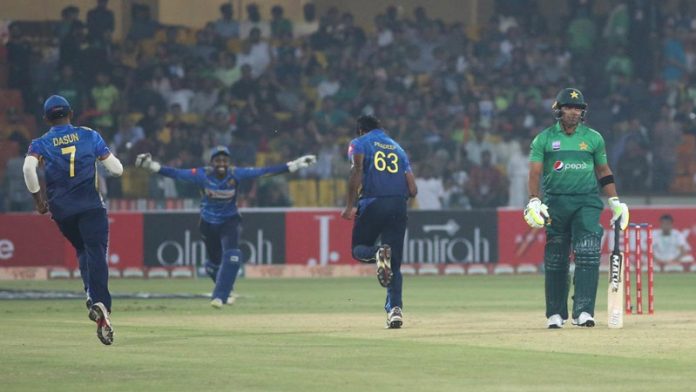 LAHORE: Top-ranked Pakistan are looking to ward off series whitewash against second-string Sri Lanka as the two sides meet in the third and final Twenty20 International (T20I) on Wednesday (today).
The match is scheduled at the Gaddafi Stadium Lahore (GSL) at 06:30 PM. The stadium will turn pink for the first time in history as the Pakistan Cricket Board (PCB) joins hands with Pink Ribbon to create awareness about breast cancer.
The Green Shirts are expected to make two changes. Umar Akmal – who scored two consecutive golden ducks in as many matches on his comeback – and Mohammad Amir will presumably be replaced by Haris Sohail and Usman Shinwari.
After losing the T20I series against Sri Lanka, Pakistan’s chief selector and head coach Misbah-ul-Haq said it is an eye-opener for the national team.
“It is failure of the team in both the T20 matches and I take full responsibility of this downfall. We have one last game remaining and still there is a chance for the players to reunite and to rethink what went wrong and to develop a spirit and confidence to perform better.
“Losing is never good, especially against a team that is without their major players, and it’s an eye-opener. We can see deficiencies in every department: bowling, batting and particularly the way we got out against spin, and also our death bowling.
“There was a clear difference between the two teams. Despite being inexperienced, they were disciplined and did everything right, while we completely failed to implement our plan.”
On the other hand, the Islanders – who lead the series 2-0 – are targeting to secure a clean sweep against the Green Shirts by downing the hosts in the final game.
Inexperienced Sri Lanka had achieved their biggest T20 win over Pakistan by 64 runs on the back of some brilliant batting and bowling in the first match on Saturday.
The visitors had earned another emphatic 35-run victory over top-ranked Pakistan on Monday in the second Twenty20 for an unassailable 2-0 lead in the three-match series.
For the first time in history, Lahore’s Gaddafi Stadium will turn pink as the Pakistan Cricket Board (PCB) joins hands with Pink Ribbon to create awareness about breast cancer.
A ceremony will be held before the third T20I between Pakistan and Sri Lanka, which will be attended by Pakistan President Dr Arif Alvi and PCB Chairman Ehsan Mani.
The President will pin pink ribbons on both team captains, while players and match officials will don the ribbons over the course of the match.
Teams
Pakistan: Sarfaraz Ahmed (captain), Fakhar Zaman, Ahmed Shehzad, Babar Azam, Haris Sohail, Umar Akmal, Iftikhar Ahmed, Asif Ali, Imad Wasim, Faheem Ashraf, Mohammad Amir, Mohammad Hasnain, Mohammad Nawaz, Shadab Khan, Usman Shinwari, Wahab Riaz
Sri Lanka: Dasun Shanaka (captain), Danushka Gunathilaka, Sadeera Samarawickrama, Avishka Fernando, Oshada Fernando, Shehan Jayasuriya, Angelo Perera, Bhanuka Rajapaksa, Minod Bhanuka, Lahiru Madushanka, Wanindu Hasaranga, Lakshan Sandakan, Isuru Udana, Nuwan Pradeep, Kasun Rajitha, Lahiru Kumara