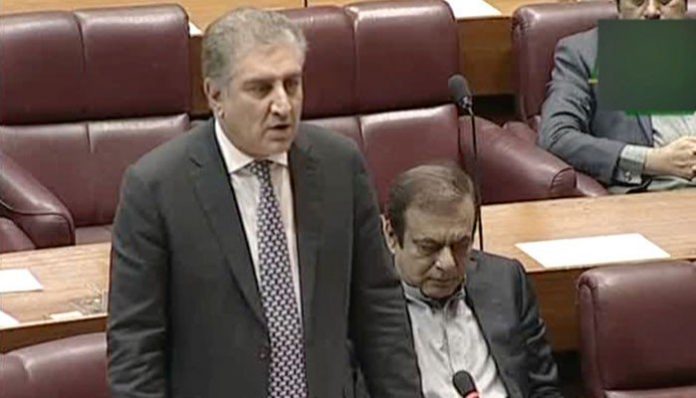 ISLAMABAD: Foreign Minister Shah Mehmood Qureshi on Friday announced Pakistan will not attend the meeting of the Organisation of Islamic Cooperation (OIC) Council of Foreign Ministers being hosted by the United Arab Emirates on March 1-2.
Qureshi made the announcement in a joint session of the Parliament, which continued for a second day today in the wake of Indian aggression against Pakistan.
Speaking at the joint session of the parliament in Islamabad today, he said, however, a lower level Pakistani delegation will attend in order to present Pakistan’s 19 resolutions that also include the human rights violations and persecution of Kashmiris in Occupied Kashmir. The delegation will also staunchly oppose any move to grant observer status to India at the OIC. He said India is neither a member of OIC nor it has any observer status to the group.
Shah Mehmood Qureshi said he contacted twice the OIC after the Pulwama incident to urge it to withdraw the invitation to Indian Minister for External Affairs. He said in his latest letter to the OIC last night, he regretted attending the forum if the invitation to India is not rescinded. The Foreign Minister said the letter was written after taking sense of the parliament.
Mentioning that the “UAE has always helped Pakistan in difficult times”, Qureshi noted with regret that despite Pakistan’s protest, the OIC’s invitation to Swaraj was not rescinded.
“There was no consultation over OIC invitation to Indian foreign minister. India is neither a member nor an observer of the OIC,” Qureshi pointed out, adding that he sent two letters – the latest only yesterday – to the UAE calling upon the body to withdraw its invitation to the Indian foreign minister.
Qureshi informed the Parliament that he requested the OIC to either rescind the invitation or postpone the session in view of the prevailing situation, neither of which was done.
“I have [therefore] decided not to attend OIC Council of Foreign Ministers meeting in Abu Dhabi,” the foreign minister announced.
However, a lower-level delegation from Pakistan will attend the OIC session in order to present Pakistan’s 19 resolutions that also include the human rights violations and persecution of Kashmiris in Indian-occupied Kashmir, Qureshi said. The delegation will also staunchly oppose any move to grant observer status to India at the OIC.
The 46th session of the OIC’s Council of Foreign Ministers is being hosted by the UAE in Abu Dhabi on March 1-2, under the title “50 Years of Islamic Cooperation: Road Map for Prosperity and Development.”
The UAE’s Minister of Foreign Affairs and International Cooperation Sheikh Abdullah bin Zayed Al-Nahyan will inaugurate the session in the presence of OIC Secretary-General Dr Yousef Al-Othaimeen and representatives of 56 member states and five observer states.
The joint session of the Parliament under Speaker Asad Qaiser is under way for a second day today to discuss the developments arising in the wake of India’s violation of the Line of Control (LoC).
Prime Minister Imran Khan during the Parliament’s joint session on Thursday had announced to release captured Indian air force pilot Abhinandan Varthaman on Friday (today) as a gesture of peace towards New Delhi and a de-escalation effort in favour of regional peace.
He had warned that efforts for de-escalation should not be considered a weakness. “All issues should be resolved through dialogue. Despite us opening the Kartarpur corridor, we received no response from India.”
“When the Pulwama attack happened, we were blamed within 30 minutes,” he had lamented. “I’m not saying that India has a part to play in it but I asked them to share evidence.”
“The only purpose of our strike was to demonstrate our capability and will. We did not want to inflict any casualty on India as we wanted to act in a responsible manner.”
“Countries are ruined because of miscalculation. War is not a solution. If India takes any action, we will have to retaliate,” he had asserted.
PM Imran had also said he attempted to hold a telephone call with Indian Prime Minister Narendra Modi.