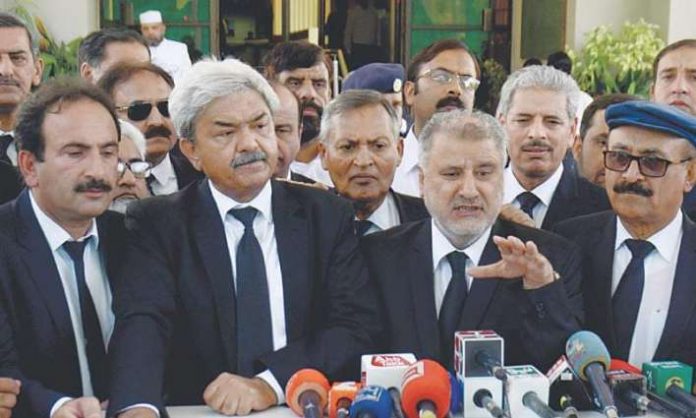 ISLAMABAD: The Pakistan Bar Council on Thursday released a statement strongly condemning and disapproving of the criticism of a special court ruling in the high treason case against former president Gen (retired) Pervez Musharraf.
On Tuesday, the special court had pronounced Musharraf guilty of the crime of high treason and sentenced him to death by hanging.
After the detailed verdict of the case was released on Thursday, several government officials, legal experts, and senior journalists had reacted to the strongly-worded order; some even terming the language used ‘ridiculous and barbaric’. Most legal experts and journalists, however, stopped short of condemning the verdict altogether.
A particular paragraph of the detailed ruling released on Thursday afternoon had attracted special attention. It said: “We direct the Law Enforcement Agencies to strive their level best to apprehend the fugitive/convict and to ensure that the punishment is inflicted as per law and if found dead, his corpse be dragged to the D-Chowk, Islamabad, Pakistan and be hanged for 3 days.”
In the statement issued by the PBC under the name of PBC Vice-Chairman Syed Amjad Shah and PBC Executive Committee Chairman Sher Muhammad Khan, the body said that it “strongly condemned and disapproved” of the statements made by state officials regarding the special court ruling, and said that these statements “amounted to contempt of court”.
The statement took exception to the manner in which the ruling was being criticized. stating that, “if there are some flaws in the judgement of the Musharraf’s case, then the law has provided procedure and proper course for agitating such flaws, if any, before the higher judicial forums by way of appeal, revision, or constitutional petition”.
The statement noted that there seemed to be no respect for the judiciary, and added that the attitude adopted by the federal government, its ministers, law officers, and especially the Attorney General of Pakistan, indicated that criticism of the judgement was similar in tune and tenor to statements made by some other officials.
“We therefore strongly condemn and disapprove the insulting attitude of the government functionaries towards judiciary and the constitutional process of dispensation of justice,” the statement reaffirmed. The statement was signed by the Secretary of the PBC.