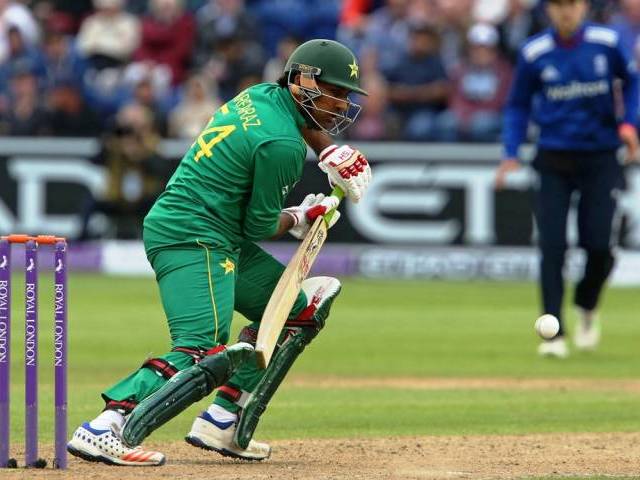 CARDIFF: Pakistan defeated England by 4 wickets in the fifth and final one-day international of the five match series played at Cardiff on Sunday.
Pakistan batsmen Sarfaraz Ahmed and Shoaib Malik scored brilliant fifties against they chases the 303 runs target against England in the n the fifth and final
Sarfaraz scored 90 runs including 10 fours before being caught off Dawson, while Shoaib Malik is not out at 65 in the 38th over. Pakistan require another 59 runs with 6 wickets and 11.0 overs remaining
Pakistan captain Azhar Ali won the toss and elected to field in the fifth and final one-day international against England. The hosts, 4-0 up and bidding for a first home 5-0 series whitewash, made three changes to the side that won by four wickets at Headingley on Thursday.
England gave an ODI debut to Hampshire left-arm spinner Liam Dawson, with specialist slow bowlers Moeen Ali and Adil Rashid both rested. Pacemen Chris Woakes and Mark Wood returned, with fast bowler Liam Plunkett also rested from this match in the Welsh capital.
Pakistan made two changes, left-arm quick Mohammad Amir returning after giant quick Mohammad Irfan was ruled out of the rest of the tour after cramping up at Headingley, and all-rounder Shoaib Malik replacing top-order batsman Sami Aslam. The Pakistan team also featured all-rounder Imad Wasim, born in the south Wales town of Swansea.
Opener Roy was the top-scorer for England with a score of 87 runs whereas middle-order batsman Stokes scored 75 runs. Quickie Hasan Ali picked 4 wickets while conceding 60 runs whereas Mohammad Amir bagged three wickets. The hosts were able to score 302 runs at the loss of 9 wickets when their innings came to an end.
After losing early wickets in the start, Pakistani middle-order batsmen Shoaib Malik and Sarfraz Ahmed played responsible innings and batted for 77 and 90 runs respectively which greatly lifted the side s morale. Rizwan was the other main contributor with the bat as he scored 34 runs and remained not out. Pakistan chased down the total with 10 balls to spare and 4 wickets in hand.
Mark Wook and Liam Dawson picked two wickets each for England. Hosts won the five match series 4-1.
Pakistan innings
Lower full-toss and Imad Wasim hits it towards the legside for a boundary and Pakistan have survived the whitewash scare and have secured a four-wicket victory at Cardiff with 10 balls in hand. Sarfraz and Malik batted exceptionally well and were later on supported by Mohammad Rizwan and Imad Wasim.
Sarfraz and Malik continue to bat responsibly and score boundaries as they have been successful thus far in defying the English pace attack. Running between the wickets has also been impressive as both batsmen close-in on their half-centuries. Pakistan 168 for 3 after 27 overs.
Men in Green made a good start early on in their chase but lost wickets in quick succession which badly affected their run chase. Opener Sharjeel Khan was dismissed for 10 runs, skipper Azhar Ali edged a ball while attempting to leave it and gave his wicket away whereas Babar Azam was bowled by Wood. Middle-order batters Shoaib Malik and wicket keeper-batsman Sarfraz are at the crease looking to guide Pakistan towards their possible first one-day win of the tour. Pakistan 84 for 3 after 16 overs.
England innings
End of the innings as Umar Gul concedes 11 runs in the final over. England finish their innings at 302 runs with the loss of 9 wickets in their 50 overs. Pakistani fast bowlers were somehow able to manage some damage control as they were able to pick wickets in quick session towards the end of the innings restricting England to a chase-able total. Let s see how the Pakistani batters respond to this challenge.
Fall of wickets in quick succession but England still going above 6 an over. Tail-enders at the crease whereas Pakistani quickies trying to put a break on England s scoring rate. Hasan Ali has three wickets to his name now. England 272 for 7 after 44 overs.
The hosts continued with their aggressive batting tactics even in the final one-day against Pakistan as red-hot Jason Roy was finally dismissed after he scored a total of 87 runs but Ben Stokes and Jonny Bairstow took the charge and continuously rotated the strike and smacked the Pakistani bowlers all around the park. England are 203 for 4 at the end of 34 overs.
Teams
England: Jason Roy, Alex Hales, Joe Root, Eoin Morgan (capt), Jonny Bairstow (wkt), Ben Stokes, Liam Dawson, Chris Woakes, David Willey, Chris Jordan, Mark Wood
Pakistan: Sharjeel Khan,Azhar Ali (capt), Shoaib Malik, Babar Azam, Sarfraz Ahmed (wkt), Mohammad Rizwan, Mohammad Nawaz, Imad Wasim, Umar Gul, Hasan Ali, Mohammad Amir. …Agencies