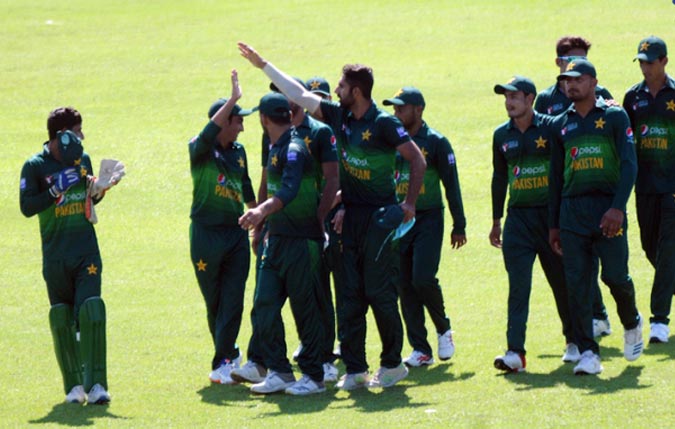 DHAKA: Pakistan on Wednesday qualified for the final of ACC Emerging Teams Asia Cup 2019 after beating India by three runs in the first semi final in Dhaka.
Pakistan — who were defending a total of 267 — restricted India to 264 for eight in 50 overs, as Pakistani bowlers displayed great control on nerves and outstanding death-overs skills.
India looked grounded towards the chase, scoring 215/5 in 40 overs. The Men in Blue needed 53 from the last 50 deliveries. They continued to sail smoothly until the 45th over, after which Pakistani bowlers started to dent India’s progress.
India needed 26 off of the last five overs to win, however, Umer Khan sent Shubham Sharma back to pavilion and brought Pakistan back in contention. Ammad Butt increased the pressure on Indians and conceded just two runs in the 47th over, before Umer got one more wicket which put India on back foot in 48th.
Pakistan had to defend eight runs from the final over but Ammad Butt showed superb skill and conceded just four runs. He also took a wicket, which restricted India to 264.
Saif Badar and Mohammad Hasnain got two wickets apiece.
Haider Ali and Omair bin Yousuf added 90 runs before the Pakistan’s first wicket. Photo: ACC
Earlier, Haider Ali and Omair bin Yousuf added 90 runs before the first wicket, after Pakistan opted to bat first at Sher-e-Bangla National Cricket Stadium.
Omair smashed two sixes and stroked three boundaries for his 97-ball-66 while Haider Ali scored 43.
Saif Badar remained not out after scoring 47 off 48 deliveries as Pakistan closed the innings at 267/7.
Pakistan’s opponent in the Saturday’s final of ACC Emerging Teams Asia Cup will be decided after the second semi final between Afghanistan and Bangladesh on Thursday.