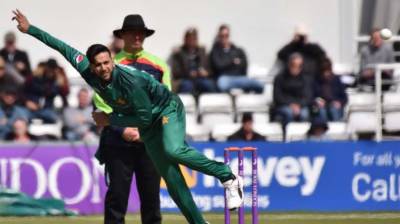 NORTHAMPTON: Fakhar Zaman s hundred trumped Josh Cobb’s unbeaten 146 for Northamptonshire as Pakistan made it back-to-back wins ahead of their white-ball games against England.
The tourists beat Kent by 100 runs in their opening 50-over warm-up in Beckenham on Saturday and defeated Northants by eight wickets at Wantage Road on Monday after topping the hosts 273-6.
Pakistan openers Imam-ul-Haq and Zaman made light work of the hosts bowlers, putting on 157 for the first wicket with the latter bringing up his three figures off 77 balls before he was bowled by Nathan Buck four balls later for 101.
Having reached his half-century, Imam was bowled by Ian Holland – the all-rounder picked up his first wicket for Northants since signing from Hampshire – but Babar Azam (68no) and captain Sarfraz Ahmed (30no) led their side home with nine overs remaining.
Cobb’s career-best List A score came from 145 deliveries and featured 12 fours and six sixes but was the only innings of note for the hosts, with Brett Hutton s unbeaten 27 the next highest score.
Each of the bowlers used by Pakistan picked up one wicket, including Mohammad Amir — the seamer bowling Richard Levi with the first ball of the match, as he hopes to force his way into his country s World Cup 15 having been left out of the preliminary squad.