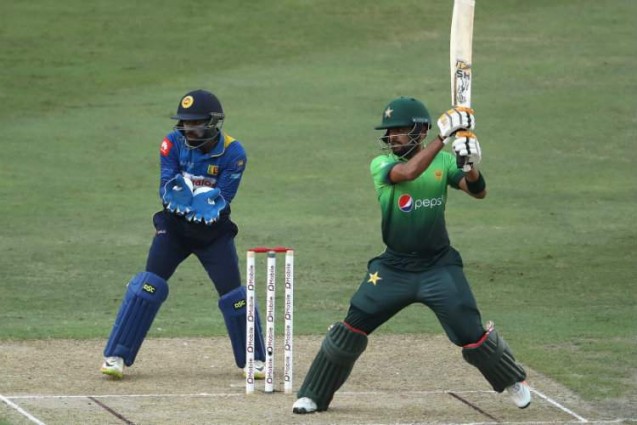 SHARJAH: Pakistan beat Sri Lanka by seven wickets in the fourth day-night international in Sharjah on Friday, taking a 4-0 lead in the five-match series.
Pakistan bowled out Sri Lanka for 173 in 43.4 overs before overhauling the target in 39 overs.
Debutant centurion Inam-ul-Haq and Fakhar Zaman returned to the pavillion after contributing a mere 19 runs and were soon followed by Mohammad Hafeez who made 9.
The innings stabilised after Babar Azam and Shoaib Malik made a stand and kept the scoreboard ticking, pushing their team towards another victory in the five-match ODI series.
Earlier, Sri Lanka´s woeful batting continued as they were bowled out for another paltry total of 173 in 43.4 overs by Pakistan.
Medium pacer Hasan Ali (3-37) and spinners Shadab Khan (2-29) and Imad Wasim (2-13) were the chief destroyers as only Lahiru Thirimanne resisted with a 94-ball 62 on a flat pitch at Sharjah stadium.
Already trailing 3-0 in the five-match series, Sri Lanka were off to a disastrous start when their in-form skipper Upul Tharanga was bowled by debutant left-arm pacer Usman Shinwari for nought off his second delivery.
Shinwari was one of two changes Pakistan made from the third one-day which they won by seven wickets in Abu Dhabi. Also brought back was Wasim. They replaced Fahim Ashraf and Rumman Raees.
Sri Lanka had made three changes, with Sadeera Samarawickrama making his debut but not much changed for them.
Another left-armer Junaid Khan ended Niroshan Dickwella´s enterprising 16-ball 22 studded with three boundaries and a six while Dinesh Chandimal was run out for 16.
Samarawickrama lasted just two balls without scoring before Thirimanne and Milinda Siriwardana (13) added 32 for the sixth wicket.
Shadab then removed Seekuge Prasanna (five) and Thisara Perera off successive deliveries before Hasan came into his wicket taking acts.
Hasan broke a resolute eight wicket stand of 43 between Thirimanne and Akila Dananjaya (18) before Wasim ended Thirmianne´s resistance in the 41st overs.
Sarfraz and his men have already wrapped up the five-match series 3-0, recording their seventh consecutive win in ODIs and the ninth victory in the last 11 matches after defeating Sri Lanka on Wednesday. The defeat was Sri Lanka’s 10th in a row.
In the third ODI, a century on debut by opener Imam-ul-Haq and a career-best 5-34 by Hasan Ali helped Pakistan to beat Sri Lanka by seven wickets. Imam became only the second batsman from his country and 13th overall to score a hundred on ODI debut before he finally fell for 100 off 125 balls.
Imam had been brought in for opener Ahmed Shehzad, who failed to perform with the bat in the opening two matches of the series.
But on Thursday, Pakistan were dealt a blow when veteran all-rounder Mohammad Hafeez was reported for suspect bowling action for the third time.
Hafeez was first suspended from bowling in December 2014. He was allowed to resume bowling in April 2015 after an independent reassessment of his bowling tests found his action to be legal. He was suspended for a second time after an independent assessment revealed that he had employed an illegal bowling action after being reported in the Galle Test v Pakistan in June 2015.
The fifth and final ODI will be played in Sharjah on October 23. The two teams will also play three T20 internationals, the first two in Abu Dhabi (October 26 and 27) and the last in Lahore (October 29).