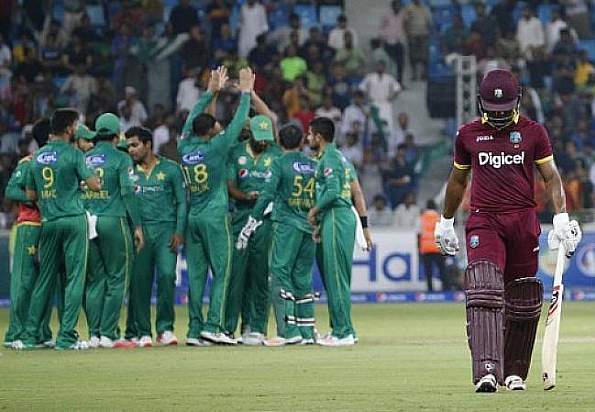 SHARJAH: Pakistan beat West Indies by 59 runs in the second day-night international in Sharjah on Sunday, taking an unbeatable 2-0 lead in the three-match series.
Pakistan scored their highest total against West Indies of 337-5 with 123 from Babar Azam, 90 by Shoaib Malik and 60 not out by Sarfraz Ahmed before restricting their opponents to 278-7 in 50 overs.
Fast-rising one-drop batsman Babar Azam cracked a successive hundred to propel Pakistan to another dominating 337-5.
The 21-year old followed his 120 in the first game on Friday with another magnificent 125-ball 123 spiced with nine boundaries and a six as Pakistan, who won the toss and batted, took full advantage of another flat strip at Sharjah stadium.
Azam added 169 for the third wicket with Shoaib Malik who missed his ninth one-day hundred by ten runs, scoring an attractive 83-ball 90 with six hits over the fence and three boundaries.
Pakistan leads the three-match series 1-0 after winning the first game — also in Sharjah — by 111 runs on Friday.
It was another dominating batting by Pakistan, shredding the West Indian bowling at will, with Azam and Malik giving strength and Sarfraz Ahmed finishing it with 47-ball 60 not out.
Azam reached his second one-day international hundred with a single off Carlos Brathwaite, waving his bat and bowing down in delight.
He was finally caught off paceman Alzarri Joseph at long-on in the 46th over.
Malik was also ruthless as he reached his 38th half-century off 55 balls before hitting three successive sixes off left-arm spinner Sulieman Benn, one went out of the Sharjah stadium.
Azam and Malik steadied the innings after openers Azhar Ali (nine) and Sharjeel Khan (24) fell in the space of three deliveries with the total at 40.
Ahmed, who hit seven fours, helped Azam add another 73 for the fourth wicket as Pakistan added 97 in the last ten overs and 55 in the last five.
Joseph and Jason Holder took two wickets apiece.