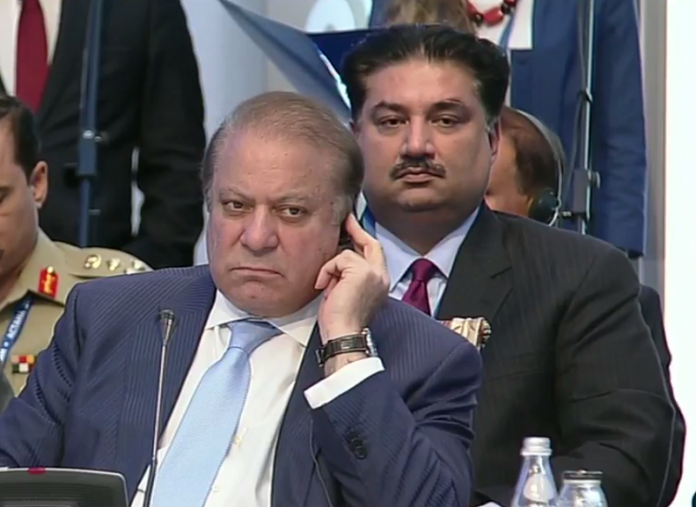 ASTANA: Pakistan on Friday formally became a full member of the Shanghai Cooperation Organization (SCO) during 17th meeting of the Heads of the State Council summit here in Astana.
Kazakh President Nursultan Nazarbayev in his inaugural speech during the 17th SCO summit welcomed Pakistan as full member of the organization.
Prime Minister Nawaz Sharif along with his delegation attended the meeting of the Heads of State Council of SCO.
Expressing gratitude to the member countries for supporting Pakistan’s permanent membership to the organization, PM Nawaz said it is a historic day for Pakistan to become the full member of the organization.
Prime minister’s advisor Sartaj Aziz, minister for commerce Khurram Dastgir Khan and minister of state for petroleum Jam Kamal are also accompanying the Prime Minister.
A welcoming ceremony was held here in which Prime Minister Nawaz Sharif was warmly received by Kazakh president in the powerful Eurasian body.
Pakistan has been an Observer with SCO since 2005 and applied for full membership of the organization in 2010. The decision, in principle, to give membership to Pakistan was taken by the SCO Heads of States meeting held in Ufa, Russia, in 2015.
The Heads of State Council is the highest decision-making body of SCO which meets annually.
Pakistan fully subscribes to the Charter of SCO and the “Shanghai Spirit”. As an Observer, Pakistan has been actively participating in the activities of the Organization.
Pakistan shares with the SCO and its member states, deep-rooted historical and cultural links, as well as strong economic and strategic relations.