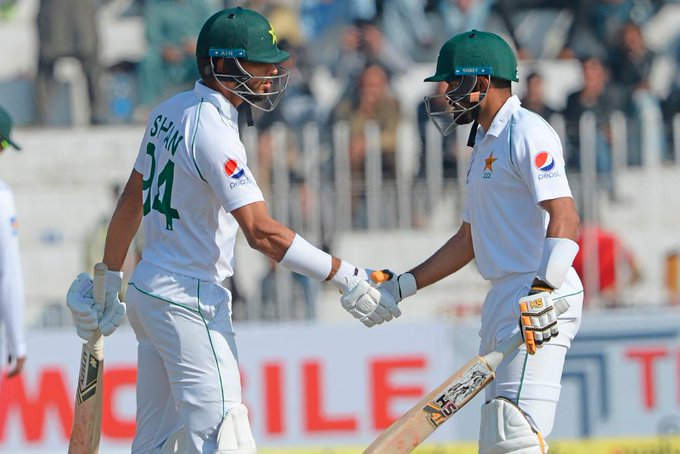 RAWALPINDI: Bangladesh took four wickets as Pakistan built a commanding first innings lead on the third day in the first Test in Rawalpindi on Sunday, reaching 420-7 at lunch.
Pakistan, with Haris Sohail not out 54 and Shaheen Shah Afridi on three, led by 187 runs in reply to Bangladesh’s 233.
Sohail, whose position was in danger after consistent failures, hit six fours and one six in his third Test half century.
Resuming at 342-3, Pakistan had hoped for quick runs, but lost the centurion Babar Azam to the first ball of the day.

Also read: Babar Azam hits ton to take lead against Bangladesh in first Test
Azam seemed caught in two minds whether to play or leave a length delivery from pace bowler Abu Jayed and edged to Mohammad Mithun at first slip.
Azam’s 143 was his fifth Test hundred and a masterclass of attractive batting which lasted 4hr 37min and included a six and 18 fours.
Asad Shafiq, who put on 137 for the fourth wicket with Azam, added just five to his overnight score before he was caught behind off fast bowler Ebadot Hossain for 65 that included nine boundaries.
Jayed was the pick of the bowlers with 3-85 in 27 overs of hard work.
Wicketkeeper Mohammad Rizwan fell quickly for 10, miscuing a hook off Rubel Hossain which was safely taken by Mahmudullah at fine leg.
Rubel also dismissed Yasir Shah leg-before for five to have figures of 2-102.