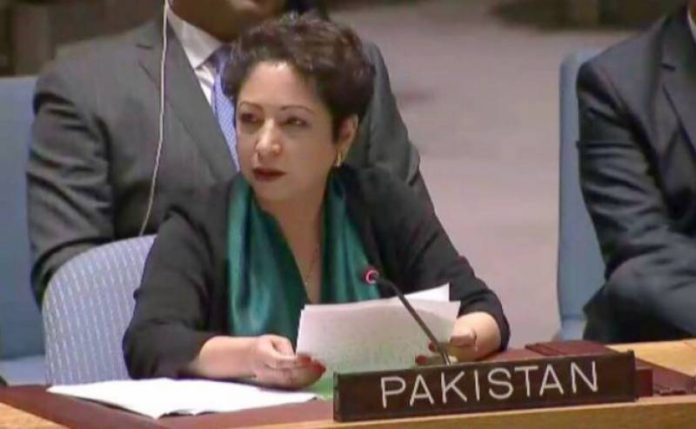 UNITED NATIONS: Pakistan has told the UN Security Council that effective border controls are a “prerequisite” to clamping down on the twin threats of transnational organized crime and terrorism.
Speaking in a debate on threats to international peace and security, Ambassador Maleeha Lodhi said that only through collective regional and international efforts could the world community choke off the various sources that support terrorist outfits through organized crime.
“We will continue to play our role to sever the vicious link between terrorism and organized crime in our region,” the Pakistani envoy said during a day-long debate in which 60 speakers took part.
“This is critical for our own people, as well as for our neighbourhood and indeed the rest of the world,” she said.
Ambassador Lodhi said the crime-terrorist nexus varies across different contexts, with several common areas of confluence, including financing tools, recruiting vulnerable youth and operating in areas outside Government control.
“Being one of the principal victims of terrorism, Pakistan”s resolve to eliminate this scourge is clear and unwavering,” she told the 15-member Council.
Underscoring its commitment in that regard, Pakistan’s law enforcement agencies continued to make record drug seizures every year.
She said it was a “tangible manifestation of our consistent and dedicated efforts to not only protect our own country, but also protect the rest of the world from this scourge.
” The global drug problem must be addressed effectively at local, national, regional and international levels, the Pakistani envoy stressed.
Citing a range of ongoing regional initiatives to tackle the illicit trade, she said a similar approach can also combat terrorism.
Steps to do so can include allocation of proper resources to better understand the correlation between terror financing and transnational organized crimes, re-establishment of government control over territories used for drug production, and promotion of development to provide alternative livelihoods.
As regards the world drug problem, Ambassador Lodhi called for focusing on reducing both the supply and the demand of narcotics drugs through a well-integrated, comprehensive and balanced approach.
However, she said that strategies must be tailored to each situation, with the United Nations playing an effective role.
Earlier, describing the current landscape and challenges ahead, the Executive Director of the United Nations Office on Drugs and Crime (UNODC), Yury Fedotov, said criminals and terrorists share a need to operate in the shadows, exploiting gaps in criminal justice responses in and between countries and regions.
They also employ each other’s tactics and trafficking practices, he said, pointing at ISIL/Da’esh as an example of a terrorist group profiting from kidnapping for ransom, illegal oil sales and trafficking in cultural property. …APP