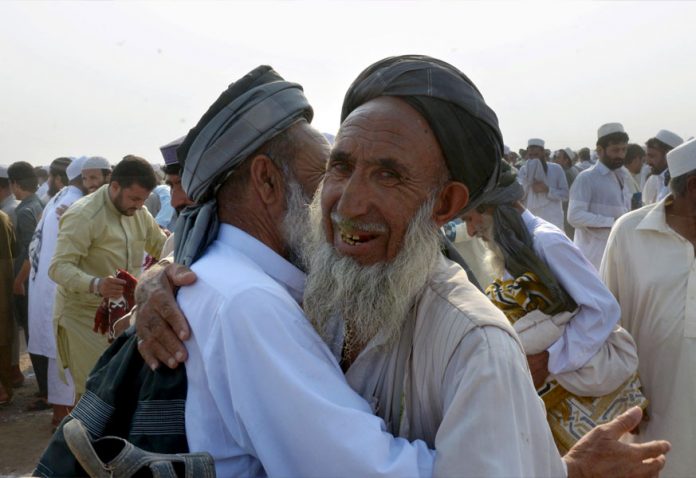 PAKISTAN: The nation celebrated Eid-ul-Azha on Tuesday with great religious fervour to commemorate the supreme sacrifice of Prophet Hazrat Ibrahim (AS).
The day dawned with special prayers in mosques for the well-being of the Muslim Ummah and progress, prosperity, safety and security of the country.
Eid congregations were held at mosques, Eidgahs and open places all over cities, towns, and villages across the country.
In the federal capital, the main Eid congregation was held at Faisal Mosque where Federal Ministers and parliamentarians present in Islamabad along with diplomats of the Muslim countries, notables and thousands of faithful offered Eid prayers.
After offering Eid prayers, the faithful slaughtered sacrificial animals in remembrance of Sunnat-e-Ibrahimi.
Federal and provincial governments also chalked out effective comprehensive security arrangements to ward off any untoward incident.
The local administrations of different cities and towns also made special arrangements for disposal of offals and other solid waste during Eid days.
Prime Minister Muhammad Nawaz Sharif offered Eid prayer at Jati Umra near Raiwind.
Later, he mingled with the workers of the PML(N) and exchanged greetings with them on the auspicious occasion of the Eid.
Speaking to the media, he extended his heartiest greeting of Eid to the entire nation and the Muslim Ummah.
In Khyber Pakhtunkhwa and FATA Eid congregations were held in more than one hundred and seventy five places.
Main congregation of Eidul Azha was held at Eidgah Charsadda Road, Peshawar.
Governor Khyber Pakhtunkhwa Engineer Iqbal Zafar Jhagra offered his Eid prayers at Governor House Peshawar.
Chief Minister Pervez Khattak offered Eid prayers at his native town in district Nowshera.
Meanwhile tight security measures have been taken to maintain peace on the occasion of Eid.
Punjab Governor Malik Muhammad Rafique Rajwana offered Eid prayers at the Badshahi Mosque in Lahore.
Punjab Chief Minister Muhammad Shahbaz Sharif offered Eid prayers at Model Town in Lahore.
He offered prayers for the progress of the country and elimination of scourge of terrorism in the country.
In Karachi, the main congregation of Eid was held at Gulshan-e-Jinnah where Acting President Mian Raza Rabbani, Sindh Governor Dr. Ishrat-ul-Ebad Khan and Deputy Mayor Karachi Arshad Wohra offered Eid prayers along with cabinet members and other notables.
Talking to media on this occasion, Mian Raza Rabbani stated we must not forget our martyrs and our brave security forces on this happy occasion, who have rendered great sacrifices for the nation.
The Governor on this occasion said that Eid-ul-Azha teaches us to follow the example of Hazrat Ibrahim (A.S) and sacrifice the things that are dear to us for Allah’s will and blessings.
He said we must not forget the poor and needy on this occasion as sharing happiness is the true soul of this occasion.
The Governor also saluted the law enforcement agencies on the occasion for their sacrifices for the nation.
In Quetta, Eid prayers were offered at more than two hundred places while the main Eid prayer congregation was held at Eidgah Toghi road.
The Governor Balochistan Muhammad Khan Achakzai celebrated Eid-ul-Azha in his native town Gulistan. Speaker provincial Assembly Raheela Hameed Khan Durrani is celebrating Eid in Quetta.
Eid-ul-Azha is also being celebrated in Gilgit Baltistan and Azad Jammu and Kashmir.
Main Eid congregation was held at Markazi Eid-Gah Masjid Khadem-e-Harmain Shareefain in Muzaffarabad.
Addressing the Eid Congregation AJK Prime Minster Raja Farooq Haider Khan said that people and Governments of Pakistan and Azad Kashmir will never forget their brethren in occupied Kashmir who are rendering unprecedented sacrifices for their freedom.
He paid rich tribute to Pak Armed forces for conducting a successful operation for eliminating the menace of terrorism from the country.
AJK President Sardar Muhammad Masood Khan offered Namaz-e-Eid at his native town Kot Mattey Khan in Rawalakot.
In Gilgit, Eid prayer was offered at Konodas Eidgah, Eidgah Jamia Imamia and Shah Karim Hostel. …APP