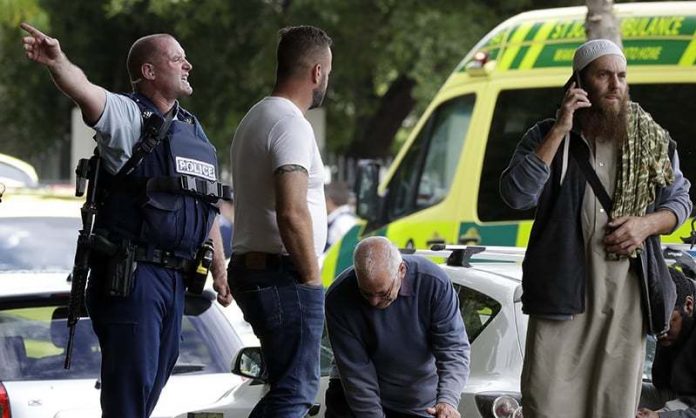 ISLAMABAD: Pakistan on Friday condemned the “terrorist incident” in New Zealand as multiple fatalities were inflicted at two mosques when at least one gunman opened fire on worshippers.
“Pakistan condemns the tragic terrorist incident in New Zealand. Our High Commission is in touch with the local authorities and trying to ascertain details,” Foreign Office spokesperson Dr Muhammad Faisal tweeted.
“Syed Moazzam Shah, Minister Political, Pakistan High Commission in New Zealand, Cell +64 21 779 495 is our focal point. Media queries however may be directed to Spokesperson in Islamabad,” he added.
Foreign Minister Shah Mehmood Qureshi also condemned the incident. “FM Shah Mahmood Qureshi has condemned in the strongest terms the tragic terrorist attack in Christchurch, NewZeland. FM has expressed condolences over loss of innocent lives in the heinous attack.”
Information Minister Fawad Chaudhry expressed shock and grief over the shootings and said, “Hearts and soul of people of Pakistan are with people of New Zeland. Bangladesh Cricket Team escaped the attack; Pakistan suffered same situation years back and can feel n relate to the pain and misery.”
A gunman opened fire on Friday prayers at a mosque in New Zealand killing many worshippers and forcing the city of Christchurch into lockdown as police launched a massive manhunt.
New Zealand media reported that between nine and 27 people were killed, but the death toll could not be confirmed. Police said multiple fatalities had occurred at two mosques, but it was unclear how many attackers were involved.
“This is one of New Zealand’s darkest days,” said Prime Minister Jacinda Ardern. “Clearly what has happened here is an extraordinary and unprecedented act of violence.”
Neither Ardern nor police gave a casualty toll.
Witnesses told media that a man dressed in a military-style, camouflage outfit, and carrying an automatic rifle had started randomly shooting people in the Al Noor mosque.
The Bangladesh cricket team was arriving for Friday prayers when the shooting occurred but all members were safe, a team coach told Reuters. …Agencies