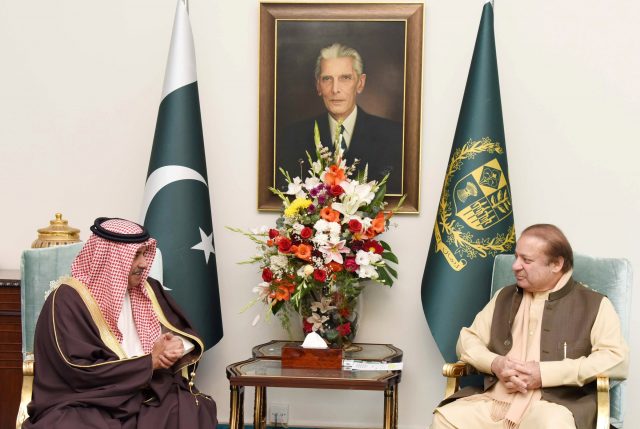 ISLAMABAD: Commander of the National Guard of Bahrain and brother of the King of Bahrain, Lt Gen Sheikh Mohamed Bin Isa Bin Salman Al-Khalifa called on Prime Minister Muhammad Nawaz Sharif here at the PM House on Tuesday.
Welcoming the delegation on visit to Pakistan, the Prime Minister said that Pakistan considered Kingdom of Bahrain a close friend and trusted partner.
“Our bilateral relations are founded on shared history, cultural linkages and strong people-to-people contacts,” he stated, according to a PM’s Office statement issued here.
The Commander National Guard of Bahrain thanked the Prime Minister for the warm welcome and conveyed good wishes from King of Bahrain Hamad bin Isa Al Khalifa.
He said that Bahrain and Pakistan were brotherly countries and the bilateral relations between the two countries would further enhance by pursuing close economic and trade relations.
The prime minister said, “I would like to express my deep gratitude to His Majesty King Hamad for his generous gift of King Hamad Nursing University to Pakistan. I also thank your Excellency for coming to Pakistan to lay the foundation stone of this project.”
He further said that Pakistan attached great importance to its relations with Bahrain and the visit of King Hamad bin Isa Al-Khalifa in March 2014 was a landmark visit which opened new avenues of bilateral cooperation between the two countries.
Lt Gen Sheikh Mohamed Bin Isa Bin Salman Al-Khalifa said the proposed up-gradation of Joint Economic Council to Joint Ministerial Commission was a positive development to boost bilateral ties.
He said the upcoming visit of Pakistani Naval Chief to Bahrain in the third week of January 2017 would be important for enhancing bilateral naval cooperation.
The prime minister said that Pakistani diaspora in Bahrain acted as a human bridge between the two brotherly countries and had been playing an important role in the development and prosperity of both the countries. …APP