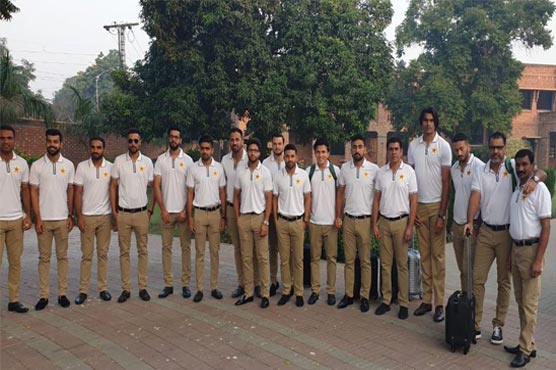 LAHORE: Pakistan Twenty20 International (T20I) team, led by newly-installed skipper Babar Azam, departed for Australia from Lahore’s Allama Iqbal International Airport on Saturday.
The Green Shirts will lock horns with the Kangaroos in three T20Is in Sydney (November 3), Canberra (November 5) and Perth (November 8).
Babar Azam, who replaced Sarfraz Ahmed, admitted on Friday that his team will face a stern test during the Tour Down under, but vowed his players will go for victory.
“Every tour is tough and Australia is always a challenging place because of the extra bounce, but we will go for wins as we always do,” said Babar Azam who has become Pakistan’s youngest T20I captain at 25.
Azam, the number one batsman in Twenty20 rankings, said he feels honored to have the chance to lead his country, 12 years after he entered a stadium as a ball picker. “I am proud that now I am the skipper,” he said.
The T20I series will be followed by two Tests in Brisbane (November 21-25) and Adelaide (November 29-December 03).