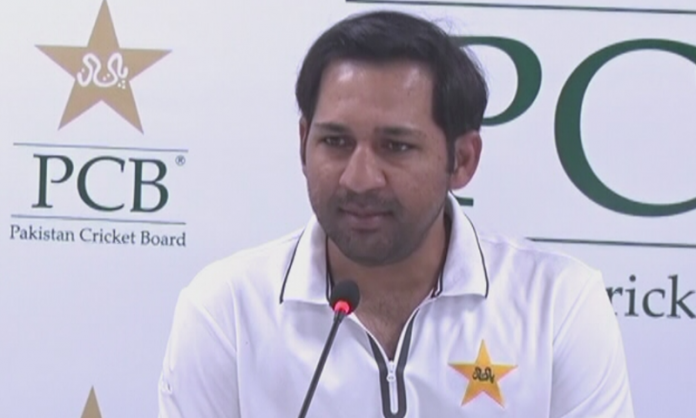 KARACHI: Members of the Pakistan cricket team returned to the country on Sunday after getting knocked out of the ICC World Cup 2019.
The players through different airlines arrived in Karachi, Lahore, Sialkot, and Islamabad as their World Cup campaign came to a close, putting an end to the assignments of Pakistan’s former cricketers associated with multiple international networks.
Pakistani skipper Sarfaraz Ahmed and Mohammad Husnain arrived in Karachi today.
Moreover, Fakhar Zaman, Shaheen Shah Afridi, Shadab Khan, and Imad Wasim arrived in Islamabad while Babar Azam, Imam-ul-Haq, and Asif Ali reached Lahore.
Skipper Sarfaraz Ahmed, who returned to Karachi early morning on Sunday from the United Kingdom addressed a press conference in Karachi.
Pakistan failed to qualify for the semifinals on net run-rate difference with New Zealand after both the teams earned 11 points each from nine league matches.
The skipper said that the team had realised the issue of run rate after its first match of the World Cup tournament — in which West Indies dismissed Pakistan for a disappointing 105 — and later tried to win matches with good margins but the pitches were not favourable.
“We are feeling as sorry as the nation [after exit from World Cup]. No one goes there to lose,” he said, acknowledging that the performance of the national team was not exemplary in the first five matches of the World Cup.
“As a team, our performance in the match with India was not good. The next seven days after the defeat were very tough for the team. However, coach Mickey Arthur tackled the players very well.”
Shoaib Malik, Mohammad Hafeez, Wahab Riaz, and Mohammad Amir will spend a few more days in England before returning to Pakistan. Bowling coach Azhar Mehmood and Manager Talat Ali will also stay in England.
Head Coach Mickey Arthur will head to South Africa and will come back to Lahore after 10 days.
Sarfaraz, who led the team to victory against India and won the Champions Trophy in 2017, has faced harsh criticism for Pakistan’s miserable run at the start of the World Cup and particularly the match against India. He, however, recieved a warm welcome at the Karachi airport upon return.
Pakistan coach Mickey Arthur, following the team’s exit, had praised Sarfaraz for helping the resurgence after being severely criticised for the India defeat.
“I must say that I’d just like to credit the captain, Sarfaraz. What he was exposed to after the Indian game was atrocious as a Pakistan cricket captain, as any captain of any cricket team,” he said.
“The way he held his composure, the way he led from the front, the way his work ethic never, ever changed. I think he’s been an inspiration to that dressing room, and I think Sarfaraz deserves a lot of credit for this.”
On Monday, all-rounder Imad Wasim and leg-spinner Shadab Khan will hold press conferences in Rawalpindi while on Tuesday, batsmen Babar Azam and Imam-ul-Haq will speak to the press in Lahore.