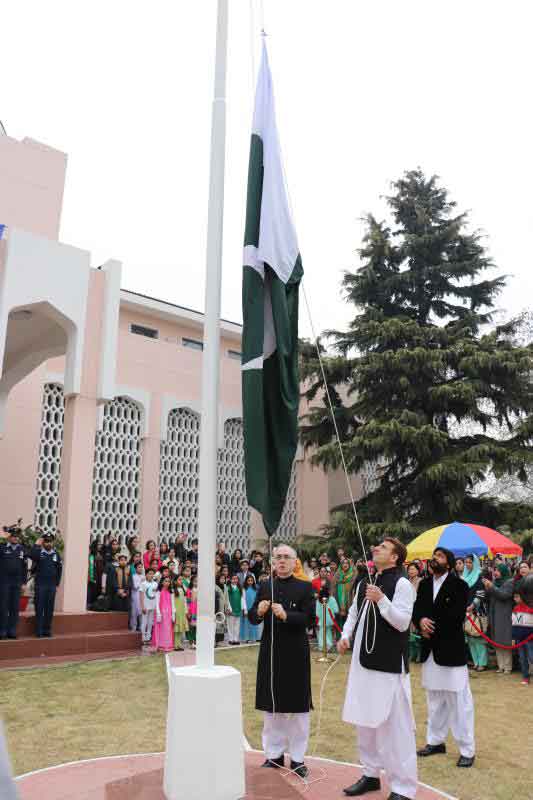 BEIJING: The National Day of Pakistan was celebrated at the Embassy of Pakistan, located in the Chinese capital Beijing, in a ceremony to mark the passing of Pakistan Resolution on 23rd March, 1940 with great spirit and fervour.
Ambassador of Pakistan Masood Khalid raised the national flag and gradually hoisted it to the mast’s summit, with the invigorating tune of the national anthem during Pakistan Day ceremony that commenced with the recitation of Holy Quran.
Ambassador Masood Khalid read out messages of the President Mamnoon Hussain and Prime Minister of Pakistan Shahid Khaqan Abbasi. He urged the Pakistani community to unite in order to achieve national milestones. He further emphasised the Pakistani community to bring honour to the country by realising the dreams of the founding fathers to attain glory.
Ambassador highlighted the importance of Pakistan-China friendship and said that both countries share the dream of development, peace and security in the region. He said that the bond of friendship between Pakistan and China has withstood the test of time through mutual trust and support.
Students of Pakistan Embassy College, Beijing presented national songs on the occasion. The ceremony was attended by Pakistani community in China.
Similar flag hoisting ceremonies were also held at Pakistani Consulates in Chengdu, Guangzhou, Hong Kong and Shanghai. In order to celebrate the occasion, a Grand National Day Reception will also be held by the Embassy later in the evening at a local hotel.