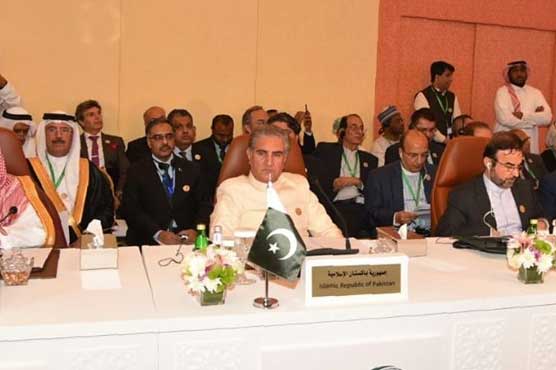 JEDDAH: Pakistan has clinched the slot of the Vice Chair of the Bureau of Organisation of Islamic Cooperation (OIC) Summit from Asia.
Prime Minister Imran Khan will attend the 14th Organisation of Islamic Cooperation (OIC) summit to be held in Makkah on Friday. The title of the conference is “Makkah Summit: Together for the Future.”
The summit to be chaired by King Salman aims to develop a unified stance on current issues and events in the Islamic world.
Speaking during Wednesday’s meeting, Qureshi drew the participants’ attention toward “human rights violations” in Indian-held Kashmir and sought the support of the OIC member states for a “Commission of Inquiry under the UN” to investigate abuses in the part of Kashmir administered by India.
Saudi Arabia remains an active member of the OIC Contact Group on Jammu and Kashmir.
The foreign minister also made a detailed reference to the situation in Palestine, strongly condemning continuing “Israeli atrocities against innocent Palestinians.”
“While reaffirming full solidarity with the Palestinian people, Pakistan renews its call for establishment of a viable, independent and contiguous state of Palestine, on the basis of internationally agreed parameters, pre 1967 borders, and with Al Quds Al-Sharif as its capital,” the foreign office statement added, quoting the foreign minister.