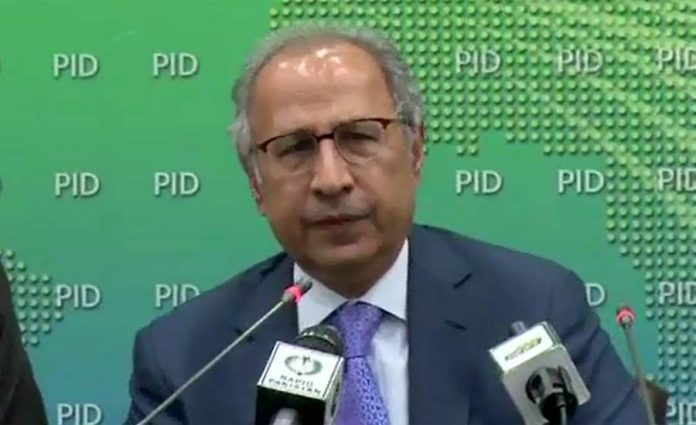 ISLAMABAD: Adviser to the Prime Minister on Finance and Revenue Abdul Hafeez Shaikh has said that Pakistan has continued to ensure the earliest completion of the Financial Action Task Force (FATF) action plan as a responsible state.
Abdul Hafeez Shaikh was addressing the United Nations’ High-Level Panel on International Financial Accountability, Transparency and Integrity for Achieving the 2030 Agenda aims to contribute to the implementation of the 2030 Agenda for Sustainable Development.
President of the General Assembly Tijjani Muhammad-Bande and President of the Economic and Social Council Ms Mona Juul were also part of the panel.
The FACTI Panel discussed among others the overall efforts undertaken by member states to implement comprehensive international frameworks related to financial accountability, transparency and integrity critical to financing the Sustainable Development Goals.
The PM’s aide on finance said that the federal government was consistently increasing the effectiveness of anti-money laundering (AML) and counter-financing of terrorism (CFT) regime.
A press release of the Finance Ministry read that Shaikh said Pakistan had already addressed 14 out of 27 FATF Action Plan items while substantial progress has been made in addressing the remaining 13 ones.
He told the panel that Pakistan had made considerable progress in addressing the recommended actions of Mutual Evaluation Report, which included 15 Legal Amendments to meet technical compliance, updation of National Risk Assessment on ML/CT, implementation of Anti-Money Laundering/Combating the Financial Terrorism (AML/CFT) measures on Designated Non-Financial Businesses & Professions (DNFBPs), Central Directorate of National Savings (CDNS) and Pakistan Post, broadening the sanction regime etc.
Pakistan had taken various measures in recent years to contain illicit financial flows through the strengthening of the AML/CFT regulations on Customer Due Diligence (CDD) and Know Your Customer (KYC)/ and other AML/CFT instructions to financial institutions have been brought in line with FATF standards, said Shaikh.
According to the state news agency APP, the adviser said Pakistan had launched the Pakistan Remittances Initiative (PRI) to facilitate the inflow of home remittance into the country through formal channels. Resultantly, Pakistan had registered growth in remittances during the last decade, rising from $6.4 billion in FY08 to $23 billion in FY20.
The adviser said the State Bank of Pakistan (SBP) and the Federal Investigation Agency (FIA) were continuing to identify illegal Money or Value Transfer Services (MVTS), hawala and hundi operators, and take measures, including closure, investigation and prosecution these operators.
He said the Panama Papers highlighted the myriad ways in which the rich could exploit secretive offshore tax regimes – and widen the gulf between the rich and the poor. Abuse of anonymous shell companies was among the reasons why many countries were facing greater challenges today in the face of the COVID-19 pandemic. For years, they had enabled corruption, fraud and tax evasion, he added.
Hafeez Shaikh also drew the attention of the panel to a research by Transparency International (TI) showing that the overall level of compliance on the part of countries with beneficial ownership transparency standards was low, as many countries had failed to take adequate measures such as the establishment of registers.