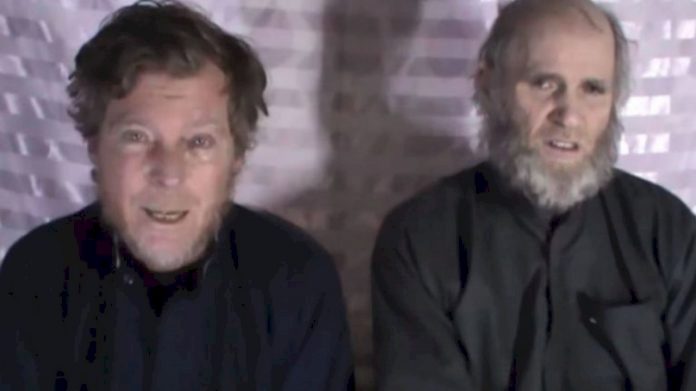 ISLAMABAD: Prime Minister Imran Khan on Tuesday said that Pakistan facilitated the release of western hostages by the Afghan Taliban.
In a series of tweets, the PM said, “Pak welcomes release of Profs Kevin King & Timothy Weeks in Afghanistan. We appreciate steps taken by all involved to make it possible.”
The premier said that the as part of the international community working to bring peace and end the suffering of the Afghan people, Islamabad fully supports the decision.
The prime minister also said that Pakistan facilitated the release as part of its policy of supporting initiatives for a negotiated political settlement of the Afghan conflict.
The PM said, “We hope this step gives a boost of confidence to all parties involved to re-engage in the peace process. Pakistan remains committed to facilitating this peace process.”
The Afghan Taliban released two Western hostages in southern Afghanistan Tuesday, handing them over to US forces more than three years after they were abducted in Kabul.
The release of American Kevin King and Australian Timothy Weeks, both professors at the American University in Kabul, comes one week after President Ashraf Ghani announced that Afghanistan would free three high-ranking Taliban prisoners in an apparent swap that he hoped would help jumpstart peace talks.
“This morning at around 10:00 am two American University professors were released in Nawbahar district of Zabul province. They were flown out of Zabul by American helicopters,” a local police source said.
Three Taliban sources in the province also said the hostages had been released.
“We released the professors and are now expecting the Kabul government and Americans to release our three prisoners as soon as possible,” one of them told foreign news agency.
There was no immediate comment from the US embassy in Afghanistan. Afghan officials in Kabul said they would release a statement shortly.
King and Weeks were kidnapped by gunmen wearing military uniforms in the heart of Kabul in August 2016. …Agencies