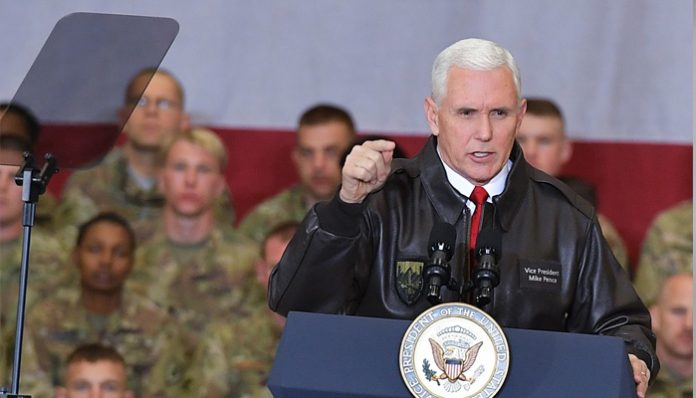 KABUL: Soon after the UNGA rejected trump’s decision to recognize Jerusalem as the Israel capital, the US Vice President Mike Pence landed in Afghanistan for an unannounced visit on Thursday night to meet with Afghan leadership and rally US troops for his first trip to the country as vice president.
In an apparent warning to Pakistan during his visit to Afghanistan, Pence said; “Pakistan has much to gain from partnering with our efforts in Afghanistan. The days to shelter terrorists have gone. It has much to lose by continuing to harbour terrorists. Geo News reported.
According to US media, the trip has made Pence the highest-ranking Trump administration official to visit an active US combat zone and came four months after President Donald Trump committed several thousand more US troops to the 16-year war effort.
“I believe victory is closer than ever before,” US media quoted Pence as saying during his meeting with troops.
According to reports, Pence and Afghan President Ashraf Ghani discussed the changes to the US strategy in Afghanistan, progress against Taliban militants and terrorist groups and the country’s delicate political state of affairs.
About an hour and a half later, Pence was back on the military base in Bagram to rally several hundred US troops, thanking them for their service during the holiday season and taking the chance to tout the direction of the new US strategy, US Media reported.