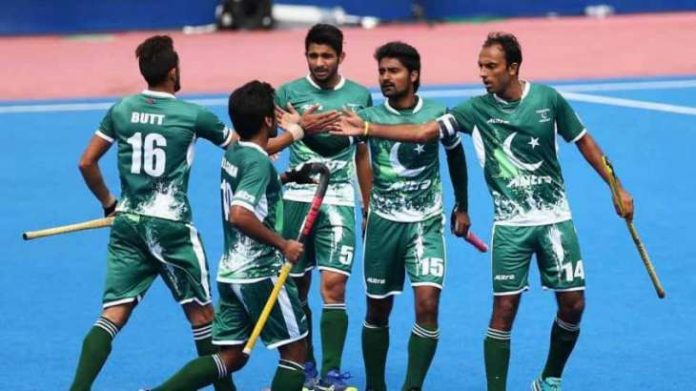 LAHORE: Pakistan hockey team left here on Saturday night for Germany to play two test, prior to its participation in the Olympic Qualifers, being played in Holland.
Pak team will warm up for their challenging assignment of Olympic Qualifers by playing Germany in two back-to-back matches on Oct 22 and 23, said a spokesman for Pakistan Hockey Federation here. He said that from Germany, the team would proceed to Holland to play two Olympic qualifiers to be played on Oct 26 and 27.
“The winner of the FIH Hockey Olympic Qualifiers will qualify for the Olympic Games Tokyo 2020,” he said.
The winners will be determined as follows: teams will be ranked according to the number of points each has accumulated in both matches (for each match, 3 points are awarded to the winner, 1 point to each team in the event of a draw and 0 point to the loser), he said.
“If there is equality among the two teams, then the teams will be ranked according to their respective goal difference. If the equality remains, a shoot-out competition will be played to establish the winner. Therefore, the objective of the Pakistan Men’s Hockey Teams will be to secure direct qualification for the Tokyo 2020 hockey tournaments – which will be staged in Japan’s capital city from 25 July to 7 August next year and involve 12 Men’s and 12 Women’s teams,” he asserted.
“During the two matches against Germany. I will use all players in order to find the best combination for the qualifiers,” said head coach of the Pak team, former Pakistan captain and Olympian, Khawaja Muhammad Junaid.
Rizwan Senior will lead the 16-member side whose other member are Waqar, Ahmad Ali (goalkeepers), Mubashar Ali, Rizwan Ali, Ahmad Butt(vice captain), Abu Bakar Mahmood. Moin Shakeel, Tasawar Abbas, Azfar Yaqoob, Rashid Mehmood, Ali Shan, Ajaz Ahmad, Umer Bhutta, Muhammad Rizwan Sr (captain), Rana Sohail, Rana Waheed. Ghazanfar Ali, Hammad Anjum and Irfan Sr.
Team officials are: Manager/Head Coach: Olympian Khawaja Junaid
Coaches: Wasim Ahmed, Zaheer Ahmad Babar, Ajmal Khan Lodhi & Sameer Hussain
Video Analyst: Nadeem Lodhi
Doctor: Asad Abbas Shah
Trainer: Jesse Wilson.