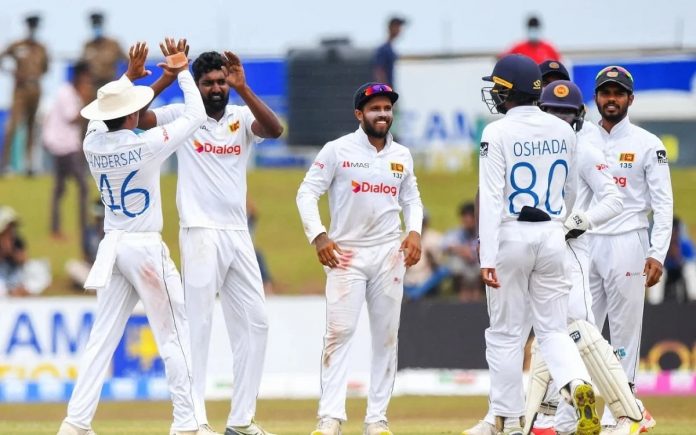 Galle: Sri Lanka won the second Galle Test as Pakistan’s batting lineup crumbled in front of the mammoth target of 508 leveling the two-match test series with a 1-1 match victory.

Jayasuriya got Agha Salman out for four at the stroke of lunch in Galle to leave Pakistan needing an inconceivable 320 to win, or to ride out the last two sessions for a draw and a 1-0 series victory.

The tourists were 188 for five with Azam batting on 76 after four wickets fell in the morning session. Pakistan resumed on 89.

Off-spinner Ramesh Mendis struck on his first ball of the day to get Imam-ul-Haq caught behind, with the left-handed batsman adding just three to his overnight 46.

Jayasuriya, who took one wicket on day four, cut short Mohammad Rizwan’s stay on 35 with his left-arm spin. Fawad Alam was run out for one.

The hosts are racing against time to bowl the opposition out and level the two-Test series with overcast conditions and looming rain a threat in the port city, after bad light bringing early ends to days three and four.

Azam survived Jayasuriya’s lbw call, which was given out by the umpire but successfully reviewed by the batsman.

He batted with assurance after beginning the day on 26 despite needing some physio help for lower back discomfort.

Dhananjaya de Silva, who hit 109 in Sri Lanka’s 380-8 declared second innings, is standing in as captain with Dimuth Karunaratne staying off the field due to his own lower back pain.