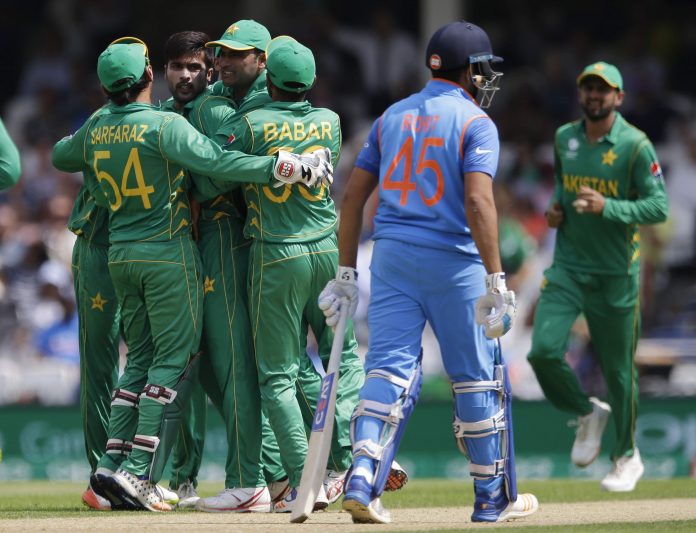 ISLAMABAD: Pakistan made history on Sunday when they clinched the Champions Trophy title for the first time since its inception in 1998 by thrashing defending champions India by a huge margin of 180 runs.
Pakistan posted the tournament’s highest total of 338 runs for the loss of four wickets in 50 overs. Openers Azhar Ali and Fakhar Zaman built a 128-run partnership. Azhar smashed 59 runs off 71 balls, including six 4s and a six, before he got run out in the 22nd over of Ravichandran Ashwin.
Then second wicket partnership between Fakhar and Babar Azam added 72 runs. Fakhar was caught by Ravindra Jadeja on Hardik Pandya’s ball in 33.1 overs when Pakistan reached 200 runs.
Fakhar made his maiden international hundred (114 runs on 106 balls) hitting 12 4s and three sixes.
Shoaib Malik scored 12 runs off 16 balls until he got out by Bhuvneshwar in 39.4 overs when Pakistan was three runs short of 250.
Pakistan’s fourth wicket fell when Babar tried to hit a boundary but unluckily was caught by Yuvraj Singh in the 42nd over. He got out on 46 runs on 52 balls hitting four 4s. He was bowled by Kedar Jadhav.
Later Muhammad Hafeez and Imad Wasim made a 71-run partnership.
Pakistan achieved the 300 landmark with Hafeez hitting a six in 45.2 overs. Hafeez (57 not out on 37 balls) and Imad on (25 not out on 21 balls) remained unbeaten.
Hafeez played brilliantly smashing a quick 57 with four 4s and three 6s. Imad also batted well hitting a four and a six.
Pakistan scored 338 runs at an average of 6.76 runs per over. India started poorly with Rohit Sharma out on a duck. He was lbw by Muhammad Amir in the first over. Amir rocked once again by dismissing Indian skipper Virat Kohli in his second over. He was caught by Shadab Khan on the very next delivery after he was dropped by Azhar Ali in the first slip. Kohli made only 5 runs.
Amir struck again and got Shikar Dhawan caught behind by Sarfraz Ahmed on 21 runs.
India was struggling on 54 runs when Yuvraj Singh got lbw on a Shadab’s ball. The umpire did not give Yuvraj out, but Pakistan opted for a review as Shadab was confident and Yuraj had to leave the ground. He scored 22 runs.
India kept stumbling and lost its fifth wicket of MS Dhoni in the 13th over. Dhoni’s catch was taken by Imad in Hasan Ali’s over. Dhoni went on 4 runs.
Shadab took his second wicket sending Kedar Jadhav back to the pavilion in the 16th over. He was caught behind by Sarfraz when Indian score was 72 runs.
The highest hitter for India Hardik Pandya got run out in the 26th over after scoring 76 runs on just 43 balls, including four 4s and six 6s. This was India’s seventh wicket for 152 runs.
Junaid Khan took his first and India’s eighth wicket when Babar caught Ravindra Jadeja in 27.3 overs. Next Ravichandran Ashwin went back to pavillion after scoring 1 run when he was caught behind by Sarfraz on Hasan’s ball.
India lost their last wicket in 30.3 on 158 runs when Sarfraz took running catch of Bumrah. It was the third wicket for Hasan.