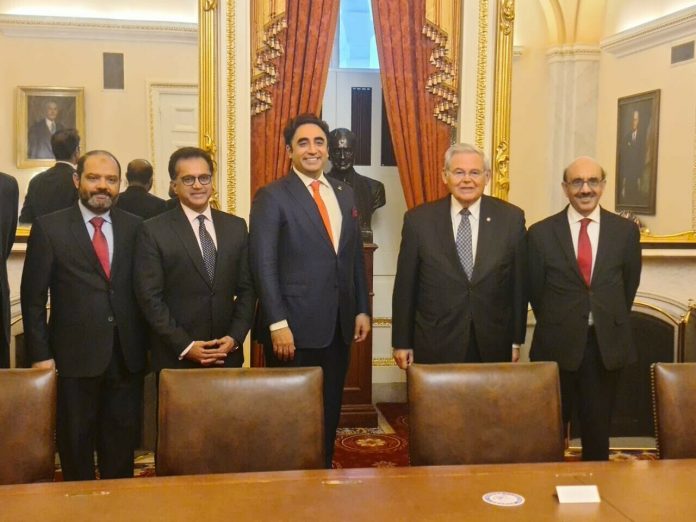 In a meeting with Chairman US Senate Foreign Relations Committee Senator Robert Menendez and Senator James Risch, the foreign minister appreciated $66.1 million aid from the US for floods-affected regions of Pakistan, the Foreign Office (FO) said in a press release. However, he noted that the initial estimate placed flood damages at over $30 billion.

Bilawal also highlighted the challenges being faced by the affected people such as outbreaks of malaria, dengue, water-borne diseases and food insecurity.

“The floods affected 33 million people, which is more than the population of Australia,” the foreign minister stressed. “Pakistan is a victim of climate change despite being minimally responsible for greenhouse emissions.”

The FM also stressed that the country was committed to building back better and constructing greener climate resilient infrastructure, adding that the scale of the calamity necessitated international support.

He lauded US Congress for standing by Pakistan whenever natural disasters hit the country and urged it to continue cooperation.

On the occasion, Menendez conveyed his condolences and sympathies to the people and the government of Pakistan over the devastation caused by the floods.

He assured of his support to enable Pakistan to overcome this challenge.

“The 75th anniversary of the establishment of diplomatic ties between Pakistan and the US is an important milestone,” he said. “Both countries have achieved a lot by working together.”

Menendez further praised the role of Pakistani diaspora in strengthening the bilateral ties. He also underscored the importance of regular engagement between Senate Foreign Relations Committee and Bilawal.

Risch empathised with flood-affected population and said that “people in waist deep waters were searching for signs of their devastated towns in Pakistan.”

On Tuesday, the US announced an additional $10 billion for food security programme in Pakistan while reaffirming its commitment to continue cooperating with the government to meet the challenge of rehabilitation and reconstruction of flood-affected areas.

“The Foreign Minister apprised Secretary Blinken about the devastation caused by the cataclysmic floods with more than 33 million people displaced and a huge loss of lives and livelihoods,” the FO said on Tuesday.

Bilawal highlighted the relief efforts of the Pakistani government and people and thanked the US government for its assistance, the FO said.

During their meeting, Bilawal said that Pakistan was seeking climate Justice and looked towards its partners to assist us in recovering from this climate-induced calamity.