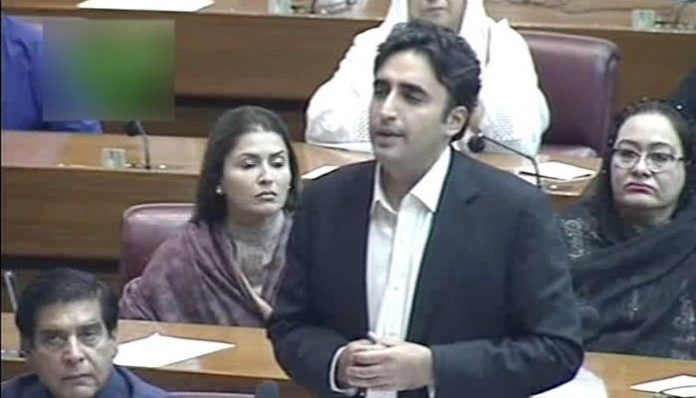 ISLAMABAD: Pakistan Peoples’ Party Chairman Bilawal Bhutto on Friday termed the decision of boycotting the meeting of Organisation of Islamic Cooperation (OIC) as unfortunate.
“Important international forums must be engaged at this critical time to put Pakistan’s point of views across and expose India’s belligerence & naked aggression,” Bilawal said after Foreign Minister Makhdoom Shah Mehmood Qureshi’s announcement that Pakistan would not attend the meeting of OIC’s Council of Foreign Ministers being held in Abu Dhabi.
Speaking in Joint Sitting of the Parliament, the minister said the lower level Pakistani delegation will attend the OIC meeting as we have to move over 19 resolutions in OIC meeting, out of which many resolutions were pertaining to Indian brutalities in Indian occupied Kashmir and human right violations there.
Pakistan will also oppose giving observer status to India.
Qureshi said India was neither a member of OIC nor observer, yet was invited that too without consulting Pakistan.
Brother countries Turkey and Iran also did not know about the invitation to India to attend OIC session as guest of honour.
He said he had written a letter to Sheikh Abdullah bin Zayed bin Sultan Al Nahyan, the minister of Foreign Affairs and International Cooperation of United Arab Emirates (UAE) urging him to review his decision of invitation to India to attend OIC session or postpone the meeting.
In response, Sheikh Abdullah expressed his inability to withdraw the invitation as India was invited before Pulwama incident.
Former president Asif Zardari too asked the government to reconsider the decision of not attending the session.