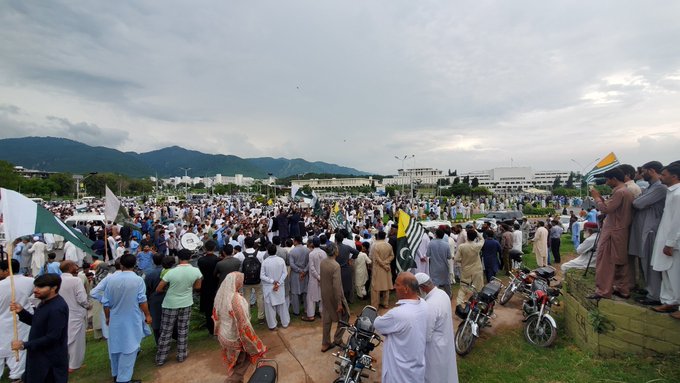 ISLAMABAD: After Prime Minister Imran Khan – in his address to the nation on Monday – announced that an event will be held every week till September 27 to show solidarity with the Kashmiri people, Pakistan Friday (today) observed ‘Kashmir Hour’ from 12:00 PM to 12:30 PM in the wake of India’s unprecedented lockdown, human rights’ violations and atrocities in the disputed Himalayan region.
Sirens were blared, traffic was halted and the national anthems of Pakistan and Kashmir were played to mark the ‘Kashmir Hour’ after a comprehensive plan was formulated by all deputy commissioners of the country for staging demonstrations against Modi-led Hindu nationalist Indian government’s illegal actions and gross violations of human rights in Kashmir.
The premier led the demonstration in front of the PM’s office. The provincial chief ministers, the governments of Azad Jammu and Kashmir and Gilgit-Baltistan headed the demonstrations in their respective areas.
Local political leaders in their respective constituencies led protest rallies in which students and civil society participated in large numbers as Pakistani nation gave the entire world a strong message by expressing support to oppressed people of the occupied valley.
Let it be known that Imran Khan had on Thursday reiterated that he wanted all Pakistanis to come out on Friday to show solidarity with the people of India-occupied Kashmir (IoK).
He had urged all to give a clear message to the Kashmiris that the entire Pakistani nation stands with them and against Indian fascist oppression, the inhumane 24-day curfew, the daily injuring and killing of Kashmiri civilians including women and children – all part of the ethnic cleansing agenda of the Modi-government and its illegal annexation of IoK.
The plan to change demography of the occupied valley is a war crime under 4th Geneva Convention, the premier affirmed.
“We must send a strong message to Kashmiris that our nation stands resolutely behind them. So I am asking all Pakistanis for half an hour tomorrow stop whatever you are doing & come out on the road to show solidarity with the Kashmiri people,” he concluded.
Effective measures are being taken for another big event on the Defence Day (Sept 6). The next meeting under PM Khan is expected to finalize the plan for that day.
While addressing the nation on Monday, Prime Minister Imran Khan had announced that an event will be held every week to show solidarity with the people of Kashmir.
“They (India) have played their trump card; they don’t have any card to play now. Now whatever needs to be done will be done by us and the world,” he had said as he took the nation into confidence on the government’s strategy regarding Indian-occupied Kashmir.
He said Pakistan’s Kashmir policy was at a decisive point and he had apprised the world leaders about the plight of the eight million Kashmiri people in Jammu and Kashmir.
Prime Minister Imran will address the UN General Assembly on Sept 27 to highlight Indian atrocities in occupied Kashmir.