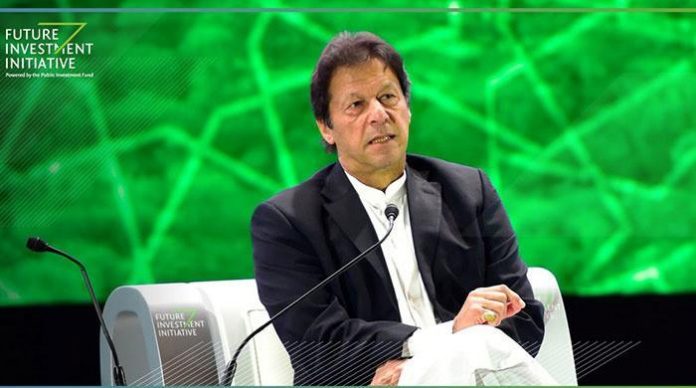 RIYADH: Prime Minister of Pakistan Imran Khan has revealed his government’s plan and revealed that the government has planned to create an enabling environment in Pakistan so that they could attract not just foreign investors, and not just overseas investors but their own investors.
Prime Minister Imran Khan delivered his speech at the Future Investment Initiative Conference (FIIC) in Riyadh.
The prime minister discussed some of the biggest challenges facing his government and his plans to tackle those issues.
“Pakistan has 100 million people below the age of 35,” he told his audience. “There is a big pressure on the government to find employment for this population.
“We have embarked on this programme that in the first five years we will build 5 million houses. We are also trying to create an enabling environment for investment; we have this big resource lying outside Pakistan.
“The plan is to create an enabling environment in Pakistan so that we could attract not just foreign investors, and not just overseas investors but our own investors.We are restructuring our duty sectors.”
The prime minister said that the mineral reserves in Pakistan could not be extracted due to terrorism and corruption issues in the past, adding that that will change now.
“There are vast amounts of mineral wealth in Pakistan,” he said. “We have hardly had any investment in our mineral resources and one of the reasons as I said in the last 15 years was the war on terror. Investors would not come back to Pakistan. We also had very poor governance and corruption.
“Now thanks to our security forces and intelligence agencies, Pakistan has brought terrorism under control. In December, Exxon is coming back to Pakistan.”
PM Khan said he has asked the Chinese government to help Pakistan in two areas: eliminating corruption and ending poverty.
“China in the past five years has really clamped down on corruption,” he said. “We have corruption so we are going to look for ways, because white collar crime is very hard to convict.
“Secondly the way in which they have brought this huge amount of people out of poverty …we have already asked the Chinese government to help us in these two areas.”
The prime minister had travelled to Saudi Arabia on Monday to attend the conference on the special invitation of King Salman Bin Abdel Aziz.
The premier is accompanied by Foreign Minister Shah Mehmood Qureshi, Finance Minister Asad Umar, Information Minister Fawad Chaudhry and Adviser to Prime Minister on Commerce and Industry Abdul Razzak Dawood.
The conference, which hosts businessmen and “representatives of hi-tech industry” from around the world, serves as an “opportunity to interact with important business leaders who are interested in investing in Pakistan”, the statement said.