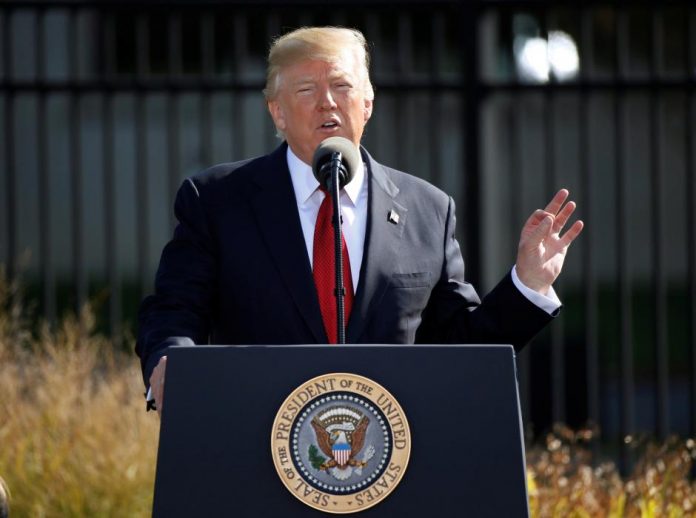 WASHINGTON: U.S. President Donald Trump said on Monday that the United States has “foolishly” handed Pakistan more than $33 billion in aid over the last 15 years while getting nothing in return and pledged to put a stop to it.
“They give safe haven to the terrorists we hunt in Afghanistan, with little help. No more!” Trump wrote on Twitter. “The United States has foolishly given Pakistan more than 33 billion dollars in aid over the last 15 years, and they have given us nothing but lies & deceit, thinking of our leaders as fools.”
It was not immediately clear what prompted Trump’s criticism of Pakistan but he has long complained that Islamabad is not doing enough to tackle Islamist militants.
The New York Times reported on Dec. 29 that the Trump administration was “strongly considering” whether to withhold $255 million in aid to Pakistan.
It said U.S. officials had sought but been denied access to a member of the Taliban-linked Haqqani network captured in Pakistan who potentially could provide information about at least one American hostage.
Pakistan’s foreign minister, Khawaja M. Asif, wrote on Twitter: “We will respond to President Trump’s tweet shortly inshallah…Will let the world know the truth..difference between facts & fiction.”
The Trump administration said in August that it was delaying sending the $255 million in aid to Pakistan. Last month, Trump said in a speech the U.S. government makes “massive payments every year to Pakistan. They have to help.”
Pakistan counters that it has launched military operations to push out militants from its soil and that 17,000 Pakistanis have died fighting militants or in bombings and other attacks since 2001.
The top U.S. general in Afghanistan, John Nicholson, said in November that he had not seen a change in Pakistan’s behavior toward militants, despite the Trump administration’s tougher line against Islamabad.
In a speech last month in Afghanistan to U.S. troops, Vice President Mike Pence said “for too long Pakistan has provided safe haven to the Taliban and many terrorist organizations, but those days are over. President Trump has put Pakistan on notice.”
Hamdullah Mohib, Afghanistan’s ambassador in Washington, said in a Twitter posting on Monday that Trump’s tweet was a “promising message to Afghans who have suffered at the hands of terrorists based in Pakistan for far too long.”
The Pakistan embassy in Washington did not immediately respond to a request for comment on Monday. – Reuters