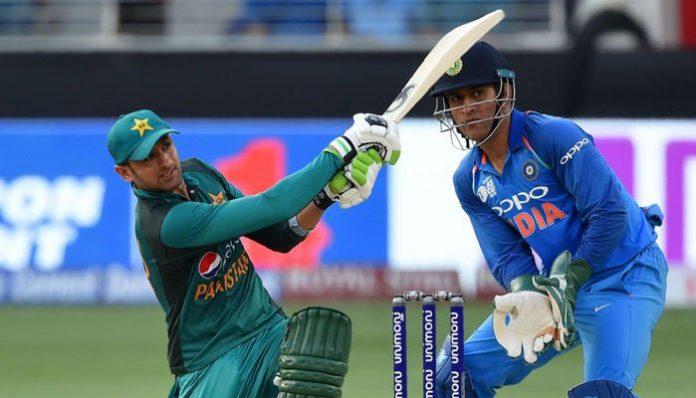 DUBAI: India restricted Pakistan to 237 runs courtesy wicket-taking spinners and fine fast bowling by Jasprit Bumrah in death overs in the Asia Cup match being played at the Dubai International Stadium on Sunday.
Shoaib Malik provided a much-needed stability to the team after back-to-back wickets halted Pakistan from building early momentum after opting to bat.
Kuldeep Yadav, Yuzvendra Chahal and Jasprit Bumrah took two wickets apiece in the match.
Pakistan received its first setback as legspinner Yuzvendra Chahal trapped opener Imamul Haq (10) on lbw in the Asia Cup. His brief stay contributed team 10 runs off 20 balls.
The next to depart was Fakhar Zaman, the out of form batsman was given lbw on the ball of Kuldeep Yadav as he lost his balance when he strode to hit. Replays indicate that the batsman managed a glove on the ball before it hit his body. A review might have prolonged his stay.
Skipper Sarfaraz Ahmed’s erroneous decision costed middle-order batsman Babar Azam’s wicket. The skipper signalled for a run but after a few steps, out realises he’ll never make it hence returned back to crease leaving Azam stranded.
A 107 stand between Malik and skipper Sarfraz Ahmed deflected the pressure towards India before Kuldeep Yadav dismissed the skipper on 44 runs.
Senior batsman Shoaib Malik (78) was the next to leave as he nudged the bowl to the keeper. The veteran’s innings included 4 boundaries and two sixes on the strike rate of 86.66.