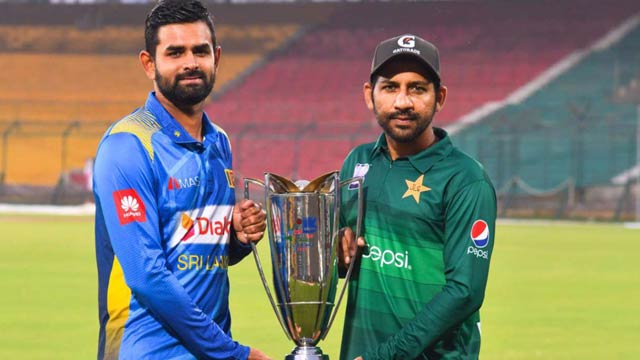 KARACHI: The second One-Day International (ODI) between Pakistan and Sri Lanka has been rescheduled from Sunday, September 29 to September 30 (Monday).
The decision has been made mutually by the two boards to allow the ground staff to prepare the National Stadium outfield for next week’s play. This week’s heavy rains, including on Friday afternoon, has left the outfield soggy, with the groundsmen requiring, at least, two complete days to make the ground fit for cricket.
PCB Director International Cricket, Zakir Khan said that this week’s unseasonal heavy rains have forced us to review the series schedule. I am thankful to Sri Lanka Cricket as well as our host broadcasters for agreeing to amend the match schedule to ensure there are no further abandonments due to rain in what is an important bilateral FTP series for Pakistan.
The PCB has also announced tickets sold for Friday, 27 September, will be valid for either 30 September or 2 October ODI, while tickets sold for Sunday, 29 September, match may also be used for either 30 September or 2 October ODI.
As per the PCB ticketing policy for the series, the PCB will allow refund of all tickets for Friday’s match or allow ticket holders to use them for either the second or third ODI.
It has also been agreed that ticket-holders of Sunday’s match unable to attend Monday’s match will also get full refunds.
Tickets for Monday’s rescheduled second ODI will also be available online and dedicated TCS counters.
Earlier, the match has been called off owing to heavy rainfall in the first one-day international (ODI) match between Pakistan and Sri Lanka which was ought to mark the historic return of cricket in the country.
Umpires called off the match and the remaining two ODIs will be played in Karachi on Sunday and Wednesday.
Karachi has not hosted a one-day international since January 2009 when Sri Lanka played two back-to-back matches at the National Stadium.
The pitch of the National Stadium Karachi was under cover owing to heavy downpour in the metropolis and the toss was delayed.
Both teams were present at the stadium where the play was scheduled to begin at 03:00 PM on Friday. Karachi is hosting an ODI for the first time in 10 years today, furthering the country’s revival in international cricket.
The tour comprises of three one-day internationals in Karachi and as many Twenty20s in Lahore. Pakistan have put in place stringent security measures normally reserved for heads of state.
All the arrangements are being led by the Pakistan’s military, with around 2,000 security personnel on alert at the team’s hotel and at the ground.
Teams
Pakistan: Sarfaraz Ahmed (captain), Babar Azam (vice-captain), Abid Ali, Asif Ali, Fakhar Zaman, Haris Sohail, Mohammad Hasnain, Iftikhar Ahmed, Imad Wasim, Mohammad Amir, Mohammad Nawaz, Mohammad Rizwan, Shadab Khan, Usman Shinwari, Wahab Riaz
Sri Lanka: Lahiru Thirimanne (captain), Danushka Gunathilaka, Sadeera Samarawickrama, Avishka Fernando, Oshada Fernando, Shehan Jayasuriya, Dasun Shanaka, Minod Bhanuka, Angelo Perera, Wanindu Hasaranga, Lakshan Sandakan, Nuwan Pradeep, Isuru Udana, Kasun Rajitha, Lahiru Kumara