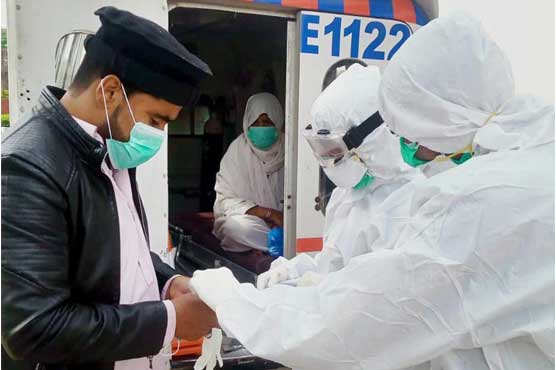 ISLAMABAD: The number of confirmed coronavirus cases in Pakistan now has passed 100,000 mark and currently stands at 103,671 after the detection of 4,728 new infections in the last 24 hours.
According to the latest data released by the National Command and Operation Center, the death toll from COVID-19 is currently recorded at 2,067 with 65 more virus-related deaths reported in the past 24 hours.
According to NCOC, 38,108 cases have been detected in Sindh, 38,903 in Punjab, 13,487 in Khyber Pakhtunkhwa, 6,516 in Balochistan, 5,329 in Islamabad, 396 in Azad Jammu and Kashmir and 932 in Gilgit Baltistan.
So far 34,355 patients have recovered from coronavirus in the country, while 67,249 are still fighting the deadly virus.
Pakistan carried out 22,650 tests to detect coronavirus in the last 24 hours taking the overall number of the tests in the country to 705,833.
Coronavirus pandemic has claimed more than 402,237 lives across the world so far, with over six point nine eight million confirmed cases.
The United States tops the list with over 112, 096 deaths followed by the Britain with 40,465, Brazil by 36044 and Italy with 33,846 deaths.
More than three point four million people have recovered from the infection.