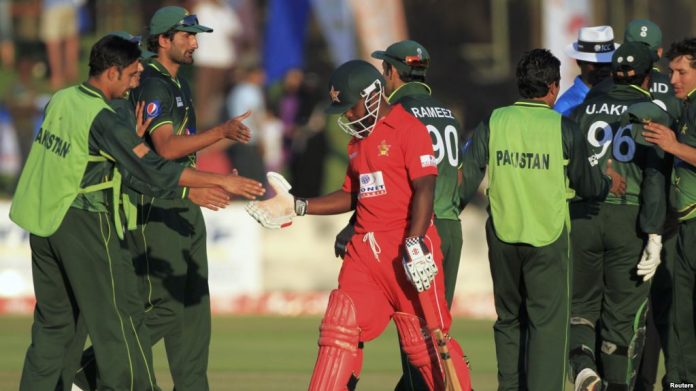 HARARE: Pakistan will be looking to maintain their top spot on the ICC T20 ranking when they take on Zimbabwe in the opening match of the triangular series today.
The tri-series will also see Australia in action who will be looking to put behind their horrid tour of England after enduring a 6-0 drubbing across limited overs formats.
Australia currently stands on number three and could capture the top spot if they win all their upcoming games in the tri-series.
The kangaroos will be up against a Pakistan side brimming with confidence after having lost only one of their eight T20 internationals this year.
Looking to extend their success, Pakistan has named a full-strength squad for their trip to Zimbabwe.
The green shirts have decided not to rest fast bowler Mohammad Amir for this tour, while 19-year-old leg-spinner Shadab Khan will be looking to play a crucial part in the series.
The experienced Mohammad Hafeez will return to the top order after his bowling action was cleared as legal last month.
Pakistan will also bank on the experience of captain Sarfraz Ahmed, who has toured Zimbabwe twice before.
The three teams will play each other twice, with a rest day on Saturday before the top two sides meet in next Sunday’s final.
The tri-series will take place from July 1 to July 8 in Zimbabwe.
The match between Pakistan and Zimbabwe will start at 1pm (Pakistan Standard Time)
Fakhar Zaman, Muhammad Hafeez, Shoaib Malik, Asif Ali, Hussain Talat, Sarfraz Ahmad (captain/wicketkeeper), Harris Sohail, Shadab Khan, Muhammad Nawaz, Faheem Ashraf, Hassan Ali, Muhammad Amir, Usman Khan Shinwari, Shaheen Shah Afridi and Sahibzada Farhan.