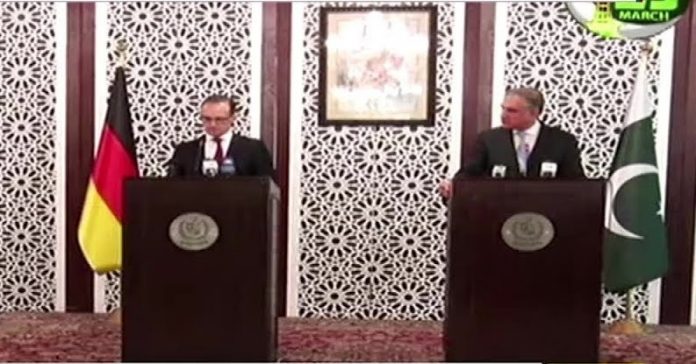 ISLAMABAD: Foreign Minister Shah Mehmood Qureshi on Tuesday said the government is ensuring implementation of the National Action Plan in both letter and spirit.
He was addressing a joint press conference with his German counterpart Heiko Maas, who arrived in Islamabad earlier today accompanied by his delegation.
Emphasising that the war against terrorism is a regional as well as a global concern, Qureshi said “the government of Pakistan is implementing the National Action Plan (NAP) in both letter and spirit.”
“Pakistan is taking steps to deal with extremism in consultation with the political leadership,” he added.
The foreign minister said he apprised his German counterpart of the escalation in tensions between India and Pakistan in the aftermath of the February 14 Pulwama attack, and Pakistan’s response to Indian aggression.
Pakistan took a number of important steps to de-escalate the tensions with India, Qureshi noted, adding that dialogue between the two neighbours is the only way forward.
“Diagonal is the only way forward. There is no military solution to the issue,” the minister stressed.
He further called on the international community and the United Nations to take notice of the ongoing human rights violations in Indian-occupied Kashmir.
German Foreign Minister Heiko Maas, addressing the press conference, expressed concern at the human rights violations in Indian-occupied Kashmir and the tensions between India and Pakistan.
The minister suggested that negotiations be held for de-escalation in tensions between India and Pakistan and for resolution of the Kashmir dispute.
Foreign Minister Heiko Maas acknowledged Pakistan’s role in the ongoing Afghan peace process. He said Germany and Pakistan enjoy good relations, and reaffirmed further cooperation with Pakistan in trade as well as other sectors.
Earlier, the German foreign minister and his accompanying delegation called on Qureshi. Both sides discussed matters pertaining to bilateral relations and regional situation.