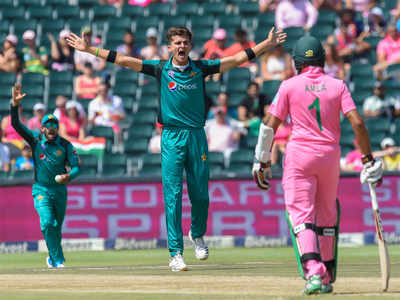 CAPE TOWN: South Africa versus Pakistan one-day international (ODI) series has turned out to be a memorable one as the five-match series is already tied at 2-2.
Both teams have headed to Newlands, Cape Town for the final decisive match with the stakes as high as ever with the series on the line on Wednesday (today).
Down and out after rain denied them an opportunity to defend a good score, Pakistan bounced back brilliantly to level the series.
South Africa will be hoping for some better performances from veteran cricketers including Quinton de Kock and Faf du Plessis.
The only player to have not featured in the series is Aiden Markram and could be given go-ahead instead of Hashim Amla, who could rest after a hectic few months.
For Pakistan, after an astounding win in the Pink ODI, the team will be tempted under the captaincy of Shoaib Malik leading the side in the absence of regular captain, Sarfraz Ahmed.
Usman Khan and Mohammed Amir might play in the last ODI. Shaheen Afridi could be left out for Hasan Ali as per the rotation policy.
Usman Khan – the young Pakistani pacer was really lethal in the fourth ODI as he dismantled the South African batting attack with four wickets in the middle overs. Usman Khan’s second spell certainly did most of the damage with the hosts sitting precariously at 156/5 in the 35th over.
Squads
South Africa
Faf du Plessis(C), Hashim Amla, Reeza Hendricks, Imran Tahir, Quinton de Kock, Aiden Markram, David Miller, Beuran Hendricks, Dale Steyn, Andile Phehlukwayo, Dwaine Pretorius, Kagiso Rabada, Tabraiz Shamsi, Rassie van der Dussen.
Pakistan
Babar Azam, Faheem Ashraf, Sarfaraz Ahmed(C), M Hafeez, Hasan Ali, Hussain Talat, M Amir, Imam-ul-Haq, Shaheen Afridi, Shoaib Malik, Usman Shinwari, Imad Wasim, M Rizwan, Fakhar Zaman, Shan Masood, Shadab Khan