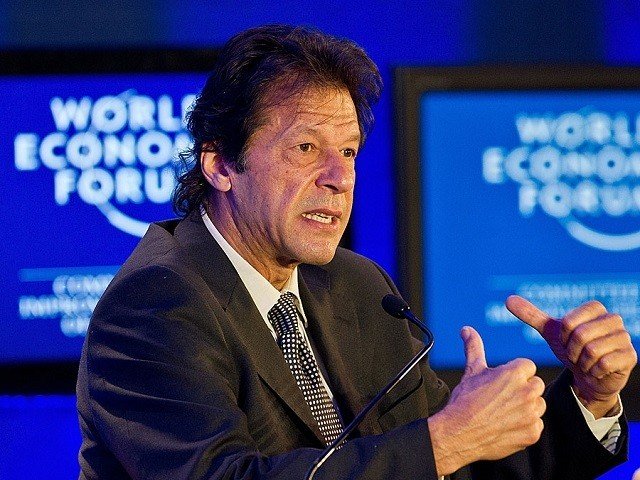 DAVOS: Prime Minister Imran Khan, in his address to corporate leaders at the Pakistan Strategy Dialogue at the World Economic Forum (WEF) in Davos, Switzerland, recalled the “heavy cost” paid by Pakistan and the damage to society after participating in the war on terror after 9/11.
He stated that the first conflict left us with militant groups after the soviets left Afghanistan, and “culture of kalashnikovs and drugs we used to pay for the war and sectarian groups.”
He also pointed out to the war on terror that left us with 70,000 people dead, and “suicide attacks”.
Due to these reasons, the PM apprised the leaders that Pakistan was considered one of the most dangerous places in the world (to travel after the war on terror) when he came into power but his government had decided to partner with peace and not any conflict.
“Secondly, the legacy of 80s when we were left with these militant groups still operating in Pakistan, this was the first government that has disarmed them and tried to rehabilitate them. As a result, the first benefit Pakistan saw was in the field of tourism.”
“In terms of tourism, Pakistan is perhaps one of the most undiscovered countries in the world. It has one of the oldest civilisations, the Indus Valley [civilization] which is 5,000 years old, and has sacred places for four religions, (including) Hinduism, Budhism, Sikhism and then of course Sufism” he said.
“All of this potential was untapped that it has the one of the most undiscovered mountain areas, half of the world peaks over 24000 ft are in Pakistan.”
“So, the first impact was that tourism doubled in one year,” PM Khan said.
“We are one of the most tourism friendly countries and all this potential was untapped, especially the mountain areas,” he said.
“The first impact was that tourism recovered in a year we believe Pakistan can collect a lot of revenue from tourism.”
Top travelling bodies have named Pakistan as a top travelling destination. We believe that tourism has the potential to earn a lot of foreign exchange for Pakistan.”
“The second step was investment investment has grown by 200 percent, and the government is doing everything possible to attract investment and to give incentives to industries.”
“In the 60s, Pakistan was one of the fastest growing countries in terms of industrialisation. Unfortunately, we lost our way in the 70s which hampered our industrial growth,” he maintained.
He asserted that his government has “actively incentivising industries and investment, and have tried to remove all the hurdles in the way of investors.”
Regarding investment, he affirmed that “we have a young population that needs employment. We need investment to come in; both local and international we need re-industrializaiton.”
The premier referred to Pakistan’s position in the World Bank’s Ease of Doing Business Index 2020 after jumping 28 places and attaining 108th rank from the earlier 136, and stated: “Pakistan was one of the top countries […] we jumped 28 places, off course a long way to go but this is the direction the country is headed.” (Pakistan secured a place among top ten global business climate improvers)
PM Imran said that the first year of his government was spent in stabilising the economy, and the country’s the current account deficit was brought down by 75 percent. “Now this year we need to focus on our economy to grow.”
“We have played a role in the conflict between Iran and Saudi Arabia to ensure that peace prevails.”
“We are also working actively with the Americans for peace in Afghanistan [where] there are good signs and a chance for a ceasefire. That is important as it will open an economic corridor for us to central Asia.
We are looking to attract investors in agriculture and mining. In addition, we are now moving towards a digital Pakistan and are inviting companies to invest in this endeavor, he maintained.
“With our agricultural economy, we are trying to attract investment in agriculture to increase yield and optimise use of water and resources […] we are also looking for investment in mining with the level of natural resources that Pakistan has.”
The PM further referred to the recent initiative of the state’s “Digital Pakistan”, and remarked “we are inviting foreign companies to come and invest in that […] we have a young Pakistani Tania Aidrus spearheading this.”
We have a young population and we are doing everything possible to accelerate this. This is the first time since the 60’s that our country is looking to go in this direction.”
Yesterday, PM Imran held bilateral meetings with the leaders of Singapore and Azerbaijan on the sidelines of the WEF.
According to an official statement issued by the Foreign Office, Azerbaijan President Ilham Aliyev and PM Imran discussed a whole spectrum of bilateral relations that are “marked by mutual trust and support”.
The prime minister will deliver a keynote address at the WEF special session today (Wednesday) at 7.45pm (PST).
According to the Foreign Office, the prime minister will speak to senior international media persons and editors during a session with the Forum’s international media council.
The premier is accompanied in Davos by Foreign Minister Shah Mehmood Qureshi, Adviser on Commerce Abdul Razaq Dawood, Special Assistant on National Security Mooed Yusuf, Special Assistant on Overseas Pakistanis Zulfiqar Abbas Bukhari, Adviser on Finance Dr Abdul Hafeez Sheikh and Ambassador at large for Investments Ali Jehangir Siddiqui.