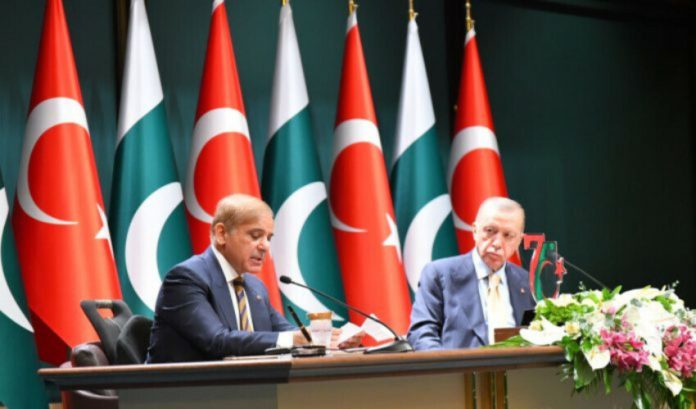 Prime Minister Shehbaz Sharif and President of Turkey Recep Tayyip Erdogan, on Wednesday, renewed their pledge to upgrade the bilateral ties between the two countries to new heights by initiating cooperation in various fields.

Addressing a joint press conference after holding a meeting with Turkish president, the prime minister said the relationship between the two countries was embedded in common culture, religious and spiritual heritage that transcend the boundaries of time politics and geography.

He said this year, the two countries were celebrating 75th year anniversary of the establishment of their diplomatic ties.

The two countries are natural partners and the challenges faced by them are the same as well, the prime minister added.

“Enemies of Turkey are enemies of Pakistan,” the prime minister said.

The prime minister said the two countries were engaged at the high level, which was instrumental in exploring and building their shared goals.

He said both brotherly countries were natural partners as the two nations had stood with each other in time of need and over core interests.

Thanking Turkey for its principled support on Jammu and Kashmir dispute, the prime minister noted that President Erdogan’s stance on the issue were a source of strength for the Kashmiris and the people of Pakistan.

He thanked the leadership and people of Turkey for their steadfast support for this just cause.

The prime minister said both the countries had worked for decades for their shared goals of a peaceful and stable Afghanistan. The countries had hosted the largest refugees in the world with their scarce resources.

President of Turkey Recep Tayyip Erdogan, in his remarks, reaffirmed to enhance the bilateral ties, close friendship and cooperation between the two countries.

He said the mutual trade between the two countries had also soared to over $1 billion and they were resolved to take it to $5 billion annually.

Tourism, education, logistic and civil aviation were the sectors in which they had been working to enhance cooperation, he added.

He also reiterated support to the government of Pakistan in its efforts against terrorism.

He said both countries were also making efforts to ensure a lasting peace and stability in Afghanistan and referred to the humanitarian assistance and support extended to the Afghan people.

The prime minister who is on a three-day official visit to Turkey held a one-on-one meeting with President Erdogan, Wednesday, followed by delegation-level talks.

During the talks, the prime minister said the two nations had always stood by each other in times of need and that these fraternal ties had been nurtured by each successive generation.

According APP, following agreements and MOUs were signed:

Memorandum of Understanding between the Turkish Presidency of Strategy and Budget, and Pakistan’s Public Private Partnership Authority

Cooperation Protocol on Debt Management between the Turkish Ministry of Treasury and Finance, and Pakistan’s Ministry of Economic Affairs

Memorandum of Understanding between the Turkish Ministry of Environment, Urbanization and Climate Change, and NAYA Pakistan Housing and Development Authority (NAPHDA) on Cooperation in the Field of Housing.