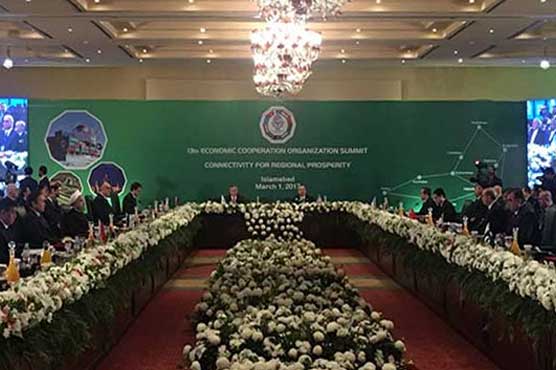 ISLAMABAD: Prime Minister Nawaz Sharif Wednesday said it was high time for the member states of the Economic Cooperation Organization (ECO) to make momentous advancement through better cooperation.
“I believe that the ECO’s time has truly come. It is primed to make momentous advancement. There has never been a more opportune time to realize our dream of `Connectivity for Regional Prosperity’,” he said while addressing the inaugural session of 13th ECO Summit being hosted by Pakistan.
With eight heads of state and government present in the Summit all the 10 ECO member states including Pakistan, Iran, Azerbaijan, Turkey, Afghanistan, Tajikistan, Kazakhstan, Turkmenistan, Kyrgyzstan and Uzbekistan were participating in the Summit.
Prime Minister Sharif, who was earlier elected Chairman of the 13th ECO Summit, said Pakistan had the location, political stability, and, now increasingly, the physical infrastructure to achieve our common vision for making ECO a powerful economic bloc and an engine of growth.
Prime Minister Sharif said as 13th Summit marked the 25th anniversary of the Organization’s expansion, it was a welcome occasion for them to renew their commitment to the ECO’s founding principles and ideals.
“At its heart, the ECO has always subscribed to a people-centric agenda. At this Summit, we want to focus on greater connectivity and trade linkages amongst our countries, in order to deliver progress to the people of the ECO region,” he added.
The Prime Minister said the ECO region was not an insignificant geographical area, adding, “it represents a vast expanse of territory that is home to nearly a sixth of all humanity.”
“Though the region has enormous potential, and accounts for 16% of the world’s population, we generate only 2% of the world’s trade. And, trade within the ECO region is a small fraction of our trade with the rest of the world,” he noted.
The Prime Minister said, “These numbers are not commensurate with what we could achieve through greater integration and connectivity. They are also at variance with our rich historical legacy.”
“This region was once synonymous with the fabled “Silk Road.” It was a melting pot of civilizations; a conduit for trade and commerce, as well as a corridor for culture and ideas. We are the proud heirs of Al-Beruni, Farabi, Saadi, Rumi and Iqbal, to name just a few of our glorious ancestors,” he added.
The Prime Minister said, “it is now time for us to reclaim our historic role as Asia’s center of economic and trade activity. Thus the theme of this Summit, “Connectivity for Regional Prosperity”, is both inspired by our shared past and evidence of our commitment to a future of shared prosperity.”
He said the ECO could be an example of regional cooperation, which touched upon and enriched the lives of our peoples.
“What makes the theme especially relevant is that more countries in the region are already making large investments in connectivity projects.”
The Prime Minister said Central Asia was fast emerging as a Trans-Eurasian land bridge, adding, oil and gaspipelines across deserts and mountains were linking their markets, while railroad networks were harbingers of their commitment to connectivity.
“But we can and should achieve even more, by pooling together our individual efforts for greater synergy. The whole is always greater than the sum of its parts,” he added.
The Prime Minister expressed his belief that the ECO’s time had truly come. “It was primed to make momentous advancement. There has never been a more opportune time to realize our dream of “Connectivity for Regional Prosperity,” he added. …APP