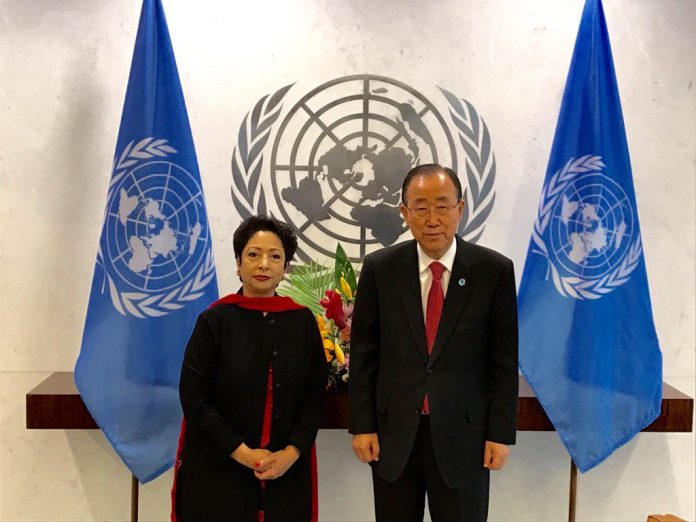 UNITED NATIONS: Pakistan urged UN Secretary-General Ban Ki-moon on Friday to personally intervene to help defuse rising tensions with India over disputed Kashmir.
“This is a dangerous moment for the region,” Pakistan s Ambassador Maleeha Lodhi told foreign news agency after meeting with Ban at UN headquarters in New York.
“The time has come for bold intervention by him if we are to avoid a crisis, because we can see a crisis building up.”
Tensions between the two arch rivals have been boiling since the Indian government accused Pakistan-based militants of launching an assault on an army base in Kashmir earlier this month that killed 18 soldiers.
Lodhi accused India of creating “conditions that pose a threat to regional and international peace and security.”
The United Nations has urged India and Pakistan to exercise restraint after New Delhi carried out a series of strikes inside Pakistani-controlled Kashmir.
UN spokesman Stephane Dujarric declined to specify what action Ban might take, but he said that the UN chief “would welcome all proposals” or initiatives aimed at de-escalation.
Ban is following the situation “with great concern,” said Dujarric, citing the escalating rhetoric between the two countries and the increased tensions along the line of control separating Kashmir between Pakistani- and Indian-controlled areas.
A UN military observer mission (UNMOGIP) is looking into reports of ceasefire violations along the line of control and will report to Ban, he added.
“UNMOGIP has not directly observed any firing across the line of control related to the latest incident,” he added.
The Pakistani ambassador said she had suggested to Ban that plans for a visit to India and Pakistan expected in November could be brought forward to avert a crisis.
Lodhi also met this week with the current Security Council president, New Zealand Ambassador Gerard van Bohemen, to ask that the top UN body keep a close eye on developments.
“This is a crisis between two nuclear neighbors. This is as dangerous as it gets,” said Lodhi.
India and Pakistan have fought three wars since they gained independence from Britain seven decades ago, two of them over the disputed Himalayan region of Kashmir.
India has accused Pakistan of harboring militants and Foreign Minister Sushma Swaraj used her address at the General Assembly earlier this week to call on countries to isolate Pakistan over its alleged ties to terror groups.
Lodhi however dismissed those calls, saying it was “delusional” to think that Pakistan as a “strategic country” can be isolated.
The Indian mission to the United Nations did not immediately respond to a foreign news agency request for comment. …Agencies