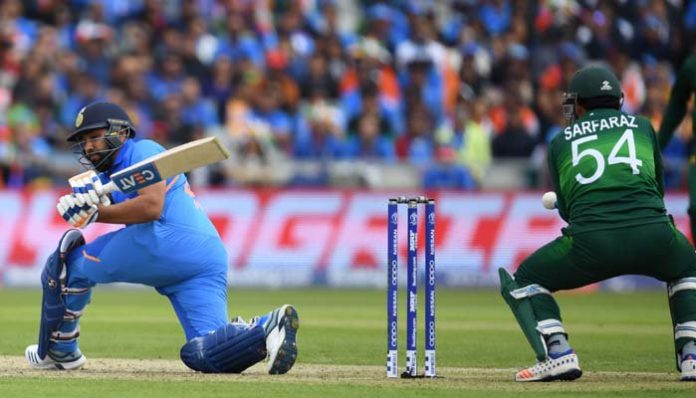 MANCHESTER: Heavy showers interrupted the high voltage game between Pakistan and India at the Old Trafford, Manchester.
Pakistan and India will be awarded one point each in case of a washout.
India were on 305/4 in 46.4 before the rain interruption.
According to the UK MET office, there is a high possibility of heavy showers for the next two hours.
Rohit Sharma made 140 runs off only 113 balls before being dismissed by Hasan Ali.
Sharma and KL Rahul took India to 101-0 off 18 overs after they lost the toss in Manchester. Sharma was 61 not out and Rahul 37 not out. Their efforts were all the more impressive as they were opening together for the first time in a one-day international. Opener Shikhar Dhawan was sidelined with a thumb injury suffered while making a century in a victory over champions Australia last time out.
Fellow Opener KL Rahul made 57 runs off 78 balls before he was dismissed by Wahab Riaz. Captain Virat Kohli and swashbuckling batsman Hardik Pandya are on the crease. India are 248-2 in the first 40 overs.
Earlier, Pakistan won the toss and opted to field against India. “We will bowl first,” said Sarfaraz. “India v Pakistan is a big game but we just have to focus on playing our best game.”
India captain Virat Kohli said he would have made the same decision, with the overcast conditions promising to assist Pakistan spearhead Mohammad Amir. “We would have bowled first to be honest,” he said. “The conditions are good for bowling but the wicket looks nice.
“There’s a lot of attention outside of the rope but when you enter the field, it’s about applying the basics of the game.
Pakistan versus India is a match imbued with the cricket obsessions of people from both sides of the border, and today the eyes of more than a billion television viewers around the globe will turn to Manchester when the arch-rivals clash in the ‘final before final’ match of the ICC Cricket World Cup 2019.
It’s noisiest, fuelled with passion and most thrilling cricket game there can be, unless India and Pakistan meet again in the final, as they did two years ago in the Champions Trophy.
Pakistan have the better record overall, winning 73 matches to India s 54, but at the World Cup it is a different story. India have come out on top all six times the sides met at the World Cup, starting with a 43-run triumph in 1992 until, most recently, a 76-run victory in 2015
Teams
Pakistan: Imam-ul-Haq, Fakhar Zaman, Babar Azam, Mohammad Hafeez, Sarfaraz Ahmed (capt, wkt), Shoaib Malik, Imad Wasim, Shadab Khan, Hassan Ali, Wahab Riaz, Mohammad Amir.
India: Rohit Sharma, KL Rahul, Virat Kohli (capt), VJ Shankar, MS Dhoni (wkt), Hardik Pandya, Kedar Jadhav, Bhuvneshwar Kumar, Kuldeep Yadav, Yuzvendra Chahal, Jasprit Bumrah.
Changes in teams
Pakistan made two changes in their playing eleven squad by adding leg-spinner Shadab Khan and all-rounder Imad Wasim and dropping batsman Asif Ali and left-arm fast-medium bowler Shaheen Afridi.
Pakistan selection chief Inzamam-ul-Haq appears to have full confidence over the squad’s ability. “India v Pakistan is always a big game – it’s like the final before the final,” said Pakistan selection chief Inzamam-ul-Haq. “It’s watched all over the world and whoever wins on Sunday will surely have a big celebration.” This match is all the more eagerly awaited because political pressures have put a stop to India-Pakistan fixtures outside of major tournaments.
Pakistan toured India in 2012/13 for a series of one-day internationals and Twenty20 matches but that was their last encounter outside of a multi-national event. Remarkably, given the strengths of both sides, India have won all six of their previous World Cup encounters against Pakistan.
India also beat Pakistan in their most recent match at the Asia Cup in the United Arab Emirates last year. But Pakistan can take heart from the final of the 2017 Champions Trophy in England, when they thrashed India by 180 runs.
An India team led by star batsman Virat Kohli have lived up to their billing as potential champions with two wins and a washout in three matches so far. The number-two ranked side won their opener against South Africa and then beat title-holders Australia before a no result against New Zealand.
India, whose last match against New Zealand was a complete washout, made one enforced change from the side that beat champions Australia by 36 runs at the Oval. Vijay Shankar replaced Shikhar Dhawan after the opener suffered a thumb injury while making a hundred in that match. 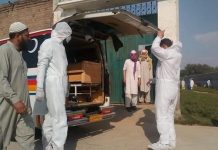